Thursday 16th August - This and that

Dayish in bed -  bit of a chest infection type sort of thing. Antibiotics kicking in, though, and lying around gives them every chance to do their stuff.

Averted a potentially very annoying incident; when I grabbed my mug from my bedside table to move it in order to read my little clock, I realised just in time that it was still full of coffee. I managed to moderate the broad sweep of my intended gesture to something less extravagant, and so was able to drink the coffee rather than mop it up.

Spent a long time finishing off the process of un-clumping Leo's fur. When the vet, as part of the annual MOT, checked to feel what state Leo's internal organs were in, he was able to reassure us that they a) were still there and b) were approximately healthy. However, for about a week afterwards, Leo was unwilling to jump up onto chairs etc in her normal care-free fashion, and, as we discovered, didn't feel like grooming the fur on her haunches. She has very, very fine "under-fur", which formed itself into matted clumps. The only way to deal with them (apart from shaving her) is to gently tease the fibres apart, separating the strands right down to her skin (initially accompanied by a steady litany of growls and hisses and threatening gestures from teeth and claws). Today I reckon I've removed the last few tangles; 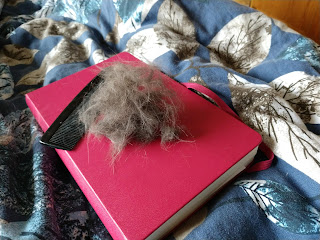 I got up at lunchtime and made myself a very satisfactory lunch - fried egg, fried tomatoes (from next door - swapped them for some apples), fried potatoes (discovered a couple of cold potatoes in the fridge so gave them a purpose in life). Feed a cold - starve a fever, so they say. I have neither, so went for a good meal as a compromise.

I've been catching up with writing out quotations from the books I've been reading; 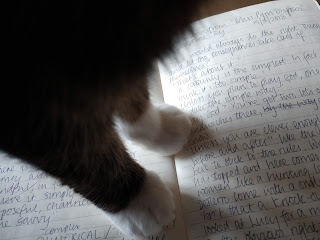 with some 'assistance'. I've wondered about the worth of doing this; but on going back through the notebook I find that it has value. I wouldn't be able to go back through the quotes if I hadn't save them somewhere (o b v i o u s l y!), and writing them out has helped me take the time to think about the ideas, or the choice of words even punctuation used by the author. So, although I bookmark the passages electronically, I think I will continue to write them out, and then add my comments as and when.

from 'Miss Pym Disposes', by Josephine Tey (conversation between Lucy Pym and Rick about a difficult decision for Miss Pym, while collecting sandwiches from a buffet)

" ‘You would always do the right thing, and let the consequences take care of themselves?’
‘That’s about it.’
‘It is certainly the simplest. In fact I think it’s too simple.’
‘Unless you plan to play God, one has to take the simple way.’
‘Play God? You’ve got two lots of tongue sandwiches there, do you know?’
‘Unless you are clever enough to “see before and after” like the Deity, it’s best to stick to the rules. Wow! The music has stopped and here comes my young woman like a hunting leopard.’ He watched Desterro come with a smile in his eyes.
‘Isn’t that hat a knock-out!’ He looked down at Lucy for a moment. ‘Do the obvious right thing, Miss Pym, and let God dispose.’"

I found the whole discussion interesting, and several phrases worth thinking about
'You would always do the right thing, and let the consequences take care of themselves?'
'Unless you plan to play God, one has to take the simple way.'
'Unless you are clever enough to "see before and after" like the Deity, it's best to stick to the rules.'
'Do the obvious right thing, Miss Pym, and let God dispose.'

I didn't see the final plot twist coming, when I was reading the book. Even though I had read it before (a long, long, time ago.)

Going out for supper now. Toodle-oo