The son and daughter came on Friday evening for a long weekend (they are still here -the weekend ends tomorrow).

It was good! To save crawling along the various roads looking for a parking space, we just drove straight to the Park and Ride, and took the bus that goes to Bus Station. It was a short distance but a long walk through the Gun Quays shopping centre, but we emerged without having bought anything except lunch.

The weather was grey, and occasionally showery, which, on the whole, is better than being blisteringly hot. 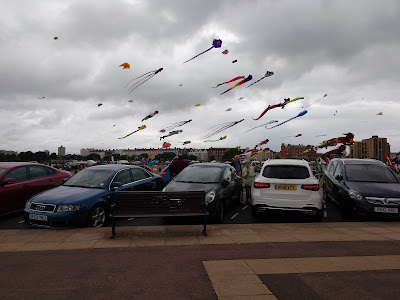 Fortunately Himself had brought a real camera! 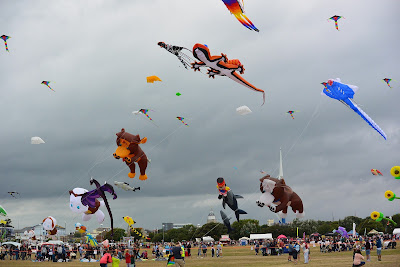 There was a lot going on - who would have thought of 'kite ballet' - surprisingly impressive. (This is a youtube from last year)

There's a lot more to see looking around Southsea and Portsmouth (not including the docks which are worth several trips in themselves). I remember the town featuring in the books by C S Forester, about the naval career of Horatio Hornblower having several scenes set in Southsea, still full of little old Naval Officers style homes. We were also very taken by the idea of a day trip by Hovercraft to the Isle of Wight!
Posted by KirstenM at 18:00:00

Email ThisBlogThis!Share to TwitterShare to FacebookShare to Pinterest
Labels: day out, family