I've had the calendar reminder popping up on my phone for several days, but not got around to doing anything about it. Yesterday I admitted as such to Him, and was relieved when he replied 'Me neither'.

Great minds think alike. A good friend sent us a card, so the day wouldn't have gone completely unmarked.

Last night after supper I was suddenly gripped by terrific stomach pains. The answer seemed to be to go to bed early - which I did, and over the course of an hour they subsided . Meanwhile, He set about clearing some space on our crowded shelves for a beautiful Belleek porcelain lamp which we had bought together in Northern Ireland.

We have decided that it is our joint wedding anniversary present to each other. 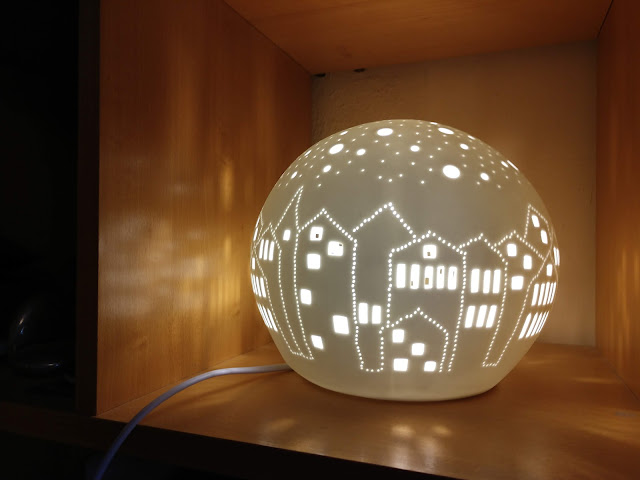 N. WILT thou have thys woman to thy wedded wyfe, to lyve together after Goddes ordynaunce in the holye estate of Matrimony? Wylt thou love her, comforte her, honour, and kepe her, in sickenes, and in healthe? And forsakyng al other, kepe the onely to her, so long as you both shall hve?
The man shall aunswere,
I will.
Then shall the Priest saye to the woman,
N. WILT thou have this man to thy wedded housband, to lyve together after Goddes ordynaunce in the holy estate of matrimony? wilt thou obey hym and serve him, love, honour, and kepe him, in sycknes and in health? And forsakynge al other, kepe the onely to him so long as ye bothe shal live
The woman shall aunswere,
I will.