And English winter really just means rain, here in the South. If I were an Eeyore, I would say it was just like the English Spring, and Summer, and Autumn too. But I'm not. (And yes, I am thinking it, even if I am saying it.) 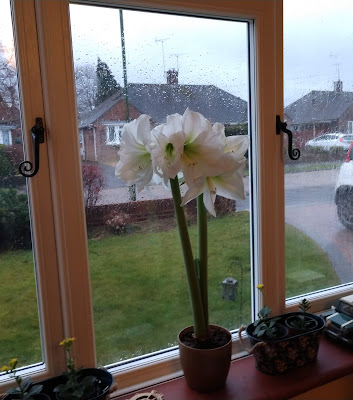 The only saving grace is that wonderful, wonderful amaryllis. Both flower spikes are fully open now.

The best Eeyore is Geoffrey Palmer. With Judi Dench as the Narrator and Kanga. Here they are, on youtube. These stories, with this cast, are on my mp3 player for when I am not sleeping in the middle of the night. Although I am listening to Ngaio Marsh 'Death in Ecstasy' which is one of the very silliest of all of her 'Inspector Alleyn' stories. It is taking me a long time, as I fall asleep after a couple of tracks and wake up several hours later to silence. Then, the next evening, I find the last bit that I can remember and listen to the next ten minutes.

The cats are learning to share the settee. It has to be done carefully, making sure each cat knows that the other one is there. and No Sudden Movements allowed by anyone. Leo likes to be wrapped up, and McCavity likes to be on top of the pile of blanket. 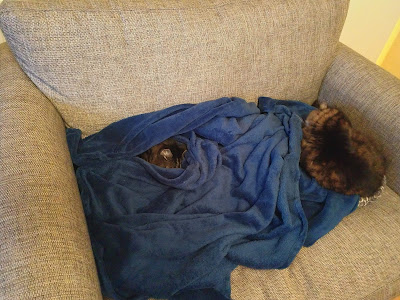 It's not an entirely satisfactory result because now I have nowhere to sit. So I am blogging instead, and listening to the story 'In which Eeyore has a birthday and gets two presents'.

This morning, He took the Panda to the vet tyre depot, as the front right tyre is leaking air. This was problematic, as I needed to go to a village school to demonstrate what a fun instrument the descant recorder is, to recruit some more pupils. Luckily a friend was willing to provide a taxi service, and lurk in the school car park while I went from class to class, and bring me home. I need to recruit at least two, and preferably about six children to make up my hours.

The tyre depot were very inconclusive, their unconsidered  advice being that we should take to Panda to their contacts in the next town and have the alloy rims refurbished. We'll get a second opinion before we go down that route, and meanwhile just keep on pumping up the tyre.

I'm testing the recipe for Slovenian honey biscuits for the Women's World Day of Prayer coffee morning at the end of the month. 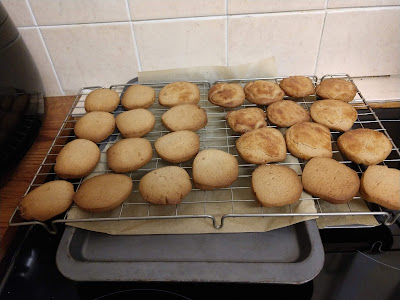 So far, so good, apart from forgetting to glaze the second batch with beaten white of egg. I'm too impatient to roll the dough out and play with cookie cutters, so I just formed the dough into a long sausage and cut off slices. The final result is supposed to look like this; 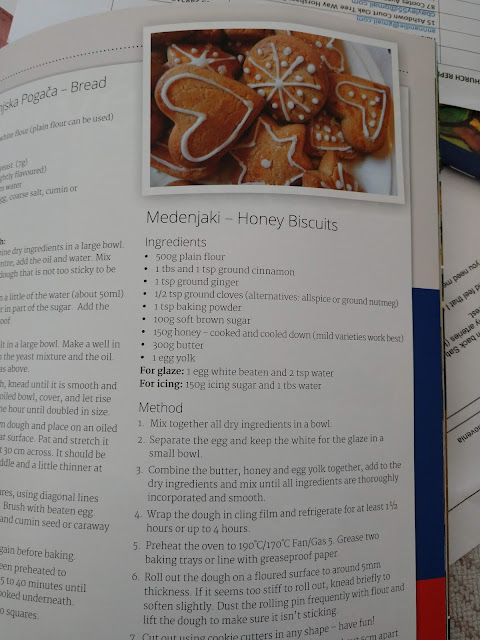 The line missing off the bottom is 'bake for 10-15 minutes, leave to cool on the tray for a minute before transferring to a wire rack'. Then you ice them - I'm wondering if that would be a fun interactive activity for the people attending the coffee morning? No, I thought not. The biscuits are supposed to keep for a fortnight in an airtight tin, or longer in the freezer. I reckon I'll get around 30 biscuits from my sausages.

Right, that's all for now, folks - I'll save the adventure of 'not enough petrol and I haven't brought my purse out with me' for another day - the moral of that tale is that it is not a bad plan to stash some cash somewhere out of sight in your car. Which I had. (Stashed some cash, for car parking). So I didn't. (Run out of petrol). So it wasn't. (An adventure).