Half term arrived in the nick of time - it felt like 'touch and go' whether I would last out... gales of laughter when I knocked on the door of a classroom on Tuesday requesting a child for a piano lesson, only to be told I had already taught him in the morning. (Really? I wonder what we did in the lesson - hopefully I will have made a note in my teaching records.)

Fortunately swathes of pupils fell by the wayside over the last two weeks - either they were ill, or on school trips - whatever - the respite was welcome! I've some lessons to make up next term, but that's something to sort out later.

I think I've been taking photographs from time to time, meaning to write a blog post. So they will now be acting as an aide-memoire; 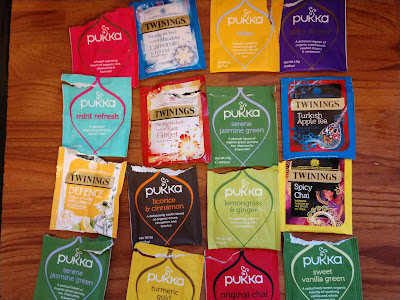 The only picture I can find is this one. I had quite a few fancy, weird and exotic teabags leftover from Christmas, and have been working through them, saving the empty packets in a pile for some reason...

I've come to the conclusion that matcha tea (Japanese green tea) is matcha over-rated, in my opinion... And lavender and rose petals are much better left out in the garden or used for perfume and pot-pourri rather than stirred into boiling water and drunk. Mint works well with most things, as does ginger and lemon. Liquorice was an unexpected ingredient in several teas, but acceptable. There you go. Now you know.

Yesterday was Valentine's Day; for once it didn't pass us by. I sent off for a Green and Blacks Chocolate Subscription for Him, so random bars of dark chocolate will arrive through the post for the next few months. The first ones came at the weekend - classic 70% cocoa and "hmm, do I, don't I, like" currant and nut chocolate. Several tastes along the way and the answer is no! Hey ho - but you won't know unless you try.

He brought a Hotel Chocolat box of weird and wonderful chocolates; I think it was this one; 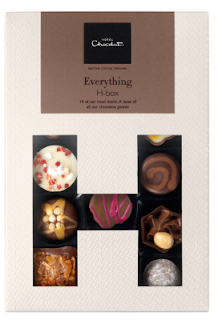 This was more successful - between us we enjoyed all - even the 'carrot cake' and the 'eton mess' - except one (cherry).