Yesterday was a gloriously sunny day, which we spent waiting in for a delivery ('all-day' delivery slot turned out to mean around 3pm).

Today has been grey, dank, miserable sort of weather. Best get used to it, as that is the forecast for the rest of the week.

I had another morning-in-bed, surrounded by cat, cups of coffee, mobile phone, Kindle, diary, suduko. Excellent. I would have got up if the weather had made it worthwhile. Still,, in spite of spending half a day lolling about, I have cleared a reasonable amount of admin

I've also been reading a lot recently; currently I have got these books on the go; 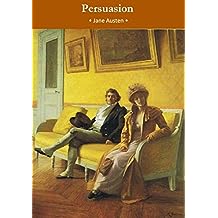 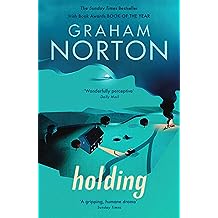 Persuasion - Jane Austen
Letters to Alice: On First Reading Jane Austen - Fay Weldon
Holding - Graham Norton (book club on Monday. I did read this last year, so am sort of skimming through)

and I'm about to re-read 'Arthur and the Seeing Stone', or maybe one of the others in the trilogy, 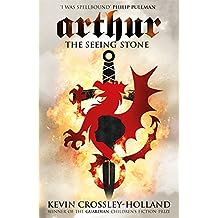 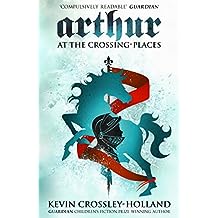 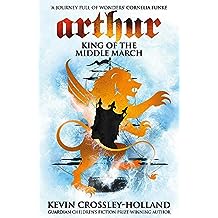 just to revisit the way the books have been written, like a series of little word-pictures.


I am determined to finish the red and yellow jumper that I finished knitting ages and ages ago - all it needs is to be sewn together, but I haven't dared tackle this until the right moment - that is when the ingredients of time, mental acuity and good lighting all coincide. I'm hoping that this conjunction of the stars and fates will happen sometime this week... 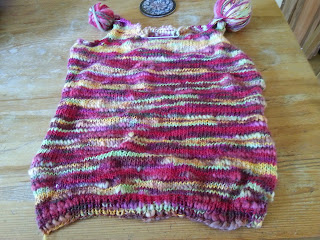 My current 'mindless knitting' scarf is going well; I started it at the end of January and it now looks like this; 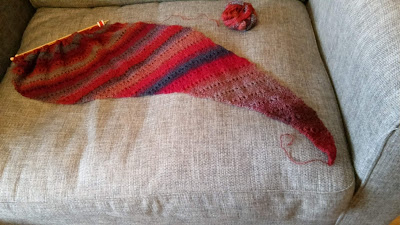 It is meant to be an odd shape; all the increases are along the curved edge and the effect is a sort of crescent shape. I have had to switch from the circular needle I started with as some of the alloy near the point flaked off (never had that happen before). I would have swapped needles in any case - the metal tips are hard on your fingers compared to these nice bamboo needles, but I'm going to run into trouble soon as I will have too many stitches. You can see how the knitting is all bunched up at the top.

The knitting is progressing well - not least because I have discovered audiobooks on YouTube! 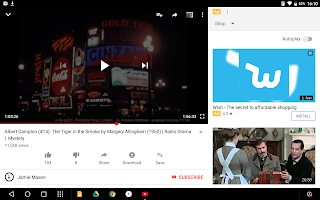 I'm halfway through listening to a dramatisation of 'Tiger in the Smoke' by Margery Allingham, originally a radio production. So far the Bad Man has murdered four people in one night, and Albert Campion's wife has survived a near miss. Thrilling!

Himself sitting back in his chair with a glass of wine and little olive palmieres - and apperitif before supper. He brought me mine earlier; 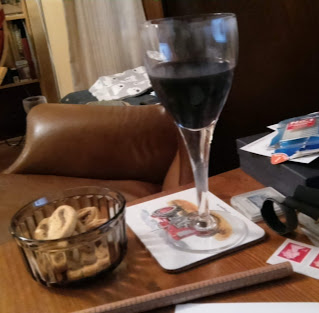 I've been making my way through them while I've been blogging. Ah well. Nothing lasts for ever. 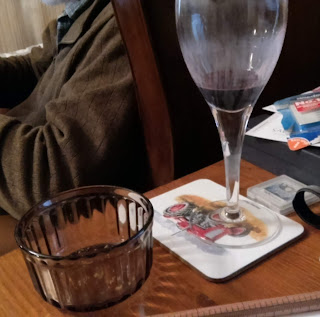 He's taking a break from cooking, sitting and reading and consuming his own little dishlet of palmieres and glass of wine while the kitchen timer ticks away like an unexploded bomb beside him.