18th May - And another week goes by

If I didn't keep a daily write up in a book beside my bed, I would have no idea what has happened this week. But that book is upstairs, and I am downstairs, and if I go upstairs I will lie down on my bed and go to sleep. Possibly forever... following the example of Leo... 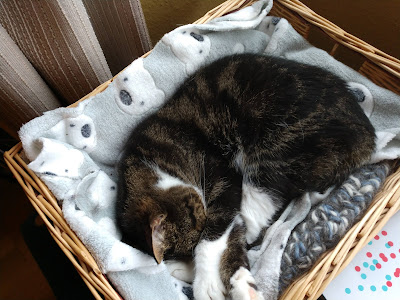 You can tell this week has got out of control by the state of the dining room table; always a good indicator of the chaos coeffecient; 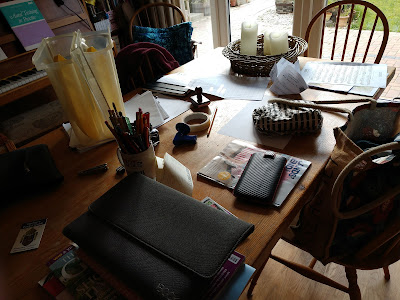 Monday - visit to my Godmother. (The last visit had been the previous day!)

There was a mix-up in the appointments for her 'barium swallow', which she had been told (in our hearing, so that hare won't run!) was going to be on Thursday 16th May. That was until she received a letter on 10th May informing her that it was to be on 9th May. 'See you there,' it ended cheerily. Part of me was quite glad the letter was late; I had moved two schools and five evening students in order to clear the 16th. We managed to reinstate the original day, for a slightly later time - Phew.

The gas bill needed sorting, (weird reporting system they use, but half an hour's concentrated work proved it was factually correct)

Sat in on a telephone consultation with her doctor to organise more fortified drinks (all she can manage now) and repeat prescription, and bring him up to date on the situation

That was Monday. Now for the rest of the week...

Tuesday was a day for teaching a school rescheduled from Thursday 2nd May (her endoscopy).

Wednesday was a day for teaching a school rescheduled from Thursday 16th May. By now I was beginning to get confused regarding days of the week with going to different schools on different days!

Thursday was a day for getting some of our own stuff done before driving off to meet her at her 'barium swallow'. She had arrived early, and they had taken her in already. Everything went smoothly, but, the barium stuff coated her throat so much that she was unable to swallow anything for several hours. It was an opportunity to collect the 84 bottles of the fortified drink from the pharmacy and stowing it in the kitchen, and waiting until at last she began to be able to manage small sips of water. Oh, and once home, after a quick bite to eat, I went to view one of the flats that we have identified as perfect for her to move in to. We were not wrong - it would be excellent if we can make it happen. Not least because it is just down the road from our house!

On Friday I tried to ring in the morning to see how she was getting on. I wasn't seriously envisaging nightmare scenarios of her being totally unable to swallow anything, not even water, just.... considering the consequences if that should be the case....but her phone kept switching to answerphone before she could get to it. I was able to contact a neighbour who went round to tell her that we would come on Saturday and fix the phone, and we learned that the she was managing to drink more easily.

On Saturday - that's today! -  off to the Music Centre at 8am. I taught until 12:45 and had a sandwich lunch after, before travelling (a 90 minute drive) to my godmother's house. The phone had fixed itself  (how?). Even better, she had improved and could manage the drinks, sip by sip, if they are thinned down with water or milk. And, even more good news, another hospital appointment, hopefully to do something about the constriction in her throat, for Thursday this week, so one of us will be there again to look after her. Back at 4:30 this afternoon - stiff from the driving and tired from everything!

He has watered all the new plants in the garden, and my vegetables, and found something that will cook from frozen in the freezer. Today is officially STOPPED. 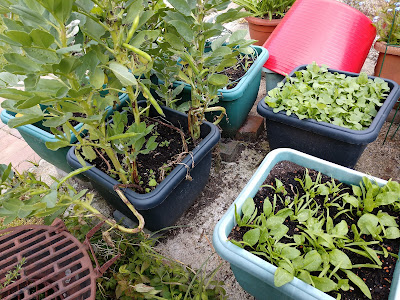 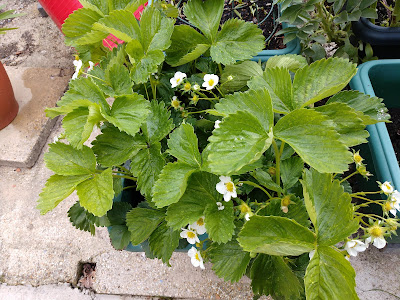 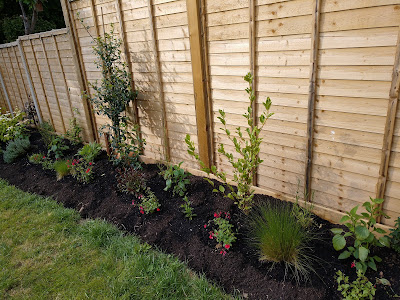 At some stage this week I found time to deal with a task that has been bothering me for months; all these tiddly little aloe vera plants, and the big ones at the back, were trying to survive in a 6" pot on a bedroom windowsill. 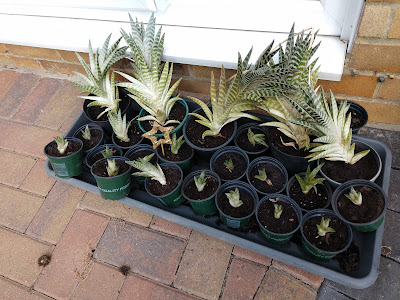 I'm not quite sure what to do with them - there are 17 little ones, and 5 hulking great big ones. All come from one little baby plant given to me by one of the daughter's friends about fifteen, or maybe twenty years ago.

Email ThisBlogThis!Share to TwitterShare to FacebookShare to Pinterest
Labels: flowers, gardening, My God-mother, sleep, the dining room table, too much to do, vegetables