Well, my Godmother is bearing up well, how I don't know. We took her another box of fortisips - luckily she really likes the taste of them -  to keep her going until the doctors can get a regular supply set up. Not helped by the fact that the particular fortisips she was prescribed by the hospital will soon no longer be stocked by NHS, so an alternative has to be found - here's hoping she like the taste of the replacement as much as she is enjoying these ones!

And here's also hoping that the hospital and the doctors and anyone else who can be helpful will bring this current situation to a quick and effective and acceptable resolution!

James came to put the plants into the new border yesterday; 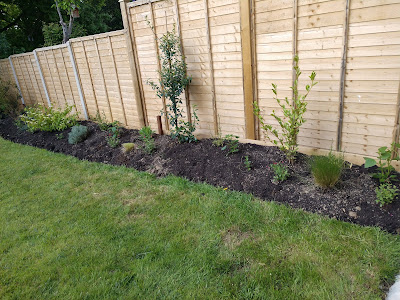 Some of the plants and shrubs have flowers on... 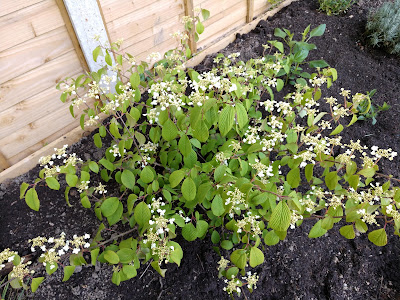 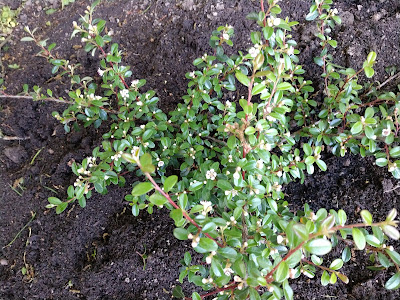 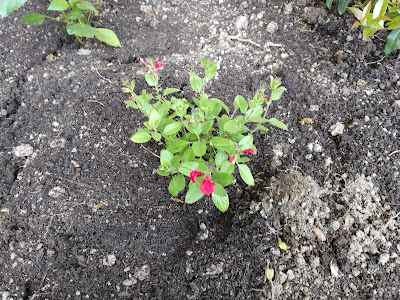 I have no idea what most of them are - James has promised to tell me when he comes to finish the job on Tuesday. I just asked him to make sure that there would be something to look out for every month of the year... He has insisted on a couple of dahlias. I have taken his word for it that they are not the same as the ones I used to help my father plant every Spring, dead-head all through every Summer, and then lift every Autumn. 'No, no, nothing like that.' I hope not. But I bet they will still be full or eariwigs.

We celebrated by mending the outside tap. Trawling through the blog I discovered this post from May 30th 2015, when I described How The Tap Stop Working; an event of great suddeness which happened in the previous winter. We've been without a tap since then, until today. It was one of those repairs which needed a number of ducks to be lined up in a row; like means, opportunity and motive; and 4pm on Saturday 11th May 2019 was the day.


I've also been knitting. It has taken me a couple of days to pluck up the courage for the next step on the cardigan which is picking up around 200 stitches all the way up the right-hand-side, across the neck, and down the left hand side. Counting and measuring and considering and then doing all of that some more. Tonight I read up a couple of sets of instructions on the internet and got started. I wanted to use some new circular knitting needles which I ordered last eek, but discovered I had ordered the ones with a 20cm cable instead of a 20 inch cable. There's a bit of a difference. 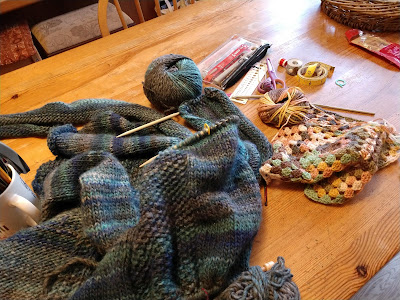 The next crochet square is well under way - nearly finished now. Two more circuits and I will have finished it - already. It is in a colourway called 'Callas' - after Maria Callas, I guess, as the different colourss are called after composers and artists. I'm not sure that she would have approved of the shades - they are quite muted, not in keeping of her character, as I recall.

I had a couple of days of twitching after I had finished the two previous squares (bright circus colours, called Kahlo, presumably for Frida?) as There Was No More Wool. 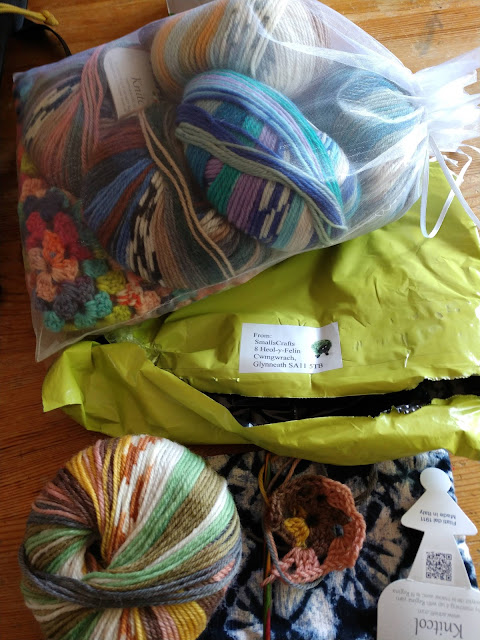 I chose the browny-greeny-mustardy skein (Callas) as everything else I am knitting is blue-ish in colour, and squshed the completed squares into the bottom of the bag.

And I have managed to clear the dining room table - apart from the knitting which is laid out for picking up those stitches - just another 120 or so to go.
Posted by KirstenM at 21:22:00