Things ought to come in threes.

While we were at the garden centre we did buy some petunias, lobelia, and something or other else. Three trays for a tenner.

Our previous foray into planters, for either side of the front door, has been remarkably satisfying. This is what we planted, back at the end of April, 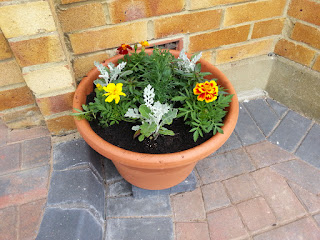 And this is how it looks now! 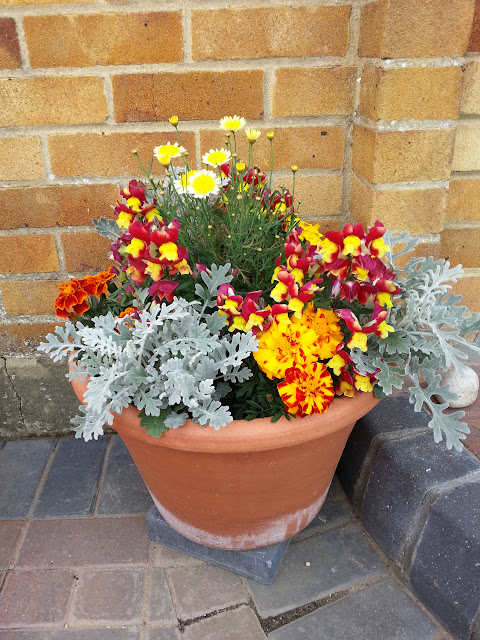 I wasn't expecting it to turn out quite so well.

On the strength of that, I have spread the plants out a bit more this time, sharing them between four smaller planters. I still had two little lobelia plants left over so stuck them in a tin bucket. My brother and his wife gave me two little miniature roses a couple of weeks ago. They have outgrown their pots, so I've stuffed them into a planter each, and put them out as well. Fingers crossed. Years ago, when we lived in Peterborough, I used to put each miniature rose into a flowerbed at the front of our house when it had finished being an indoor plant. They loved that spot, and over the three years we were there they formed a fairly solid hedge of brilliant colour. Let's hope that these ones cope with outside. 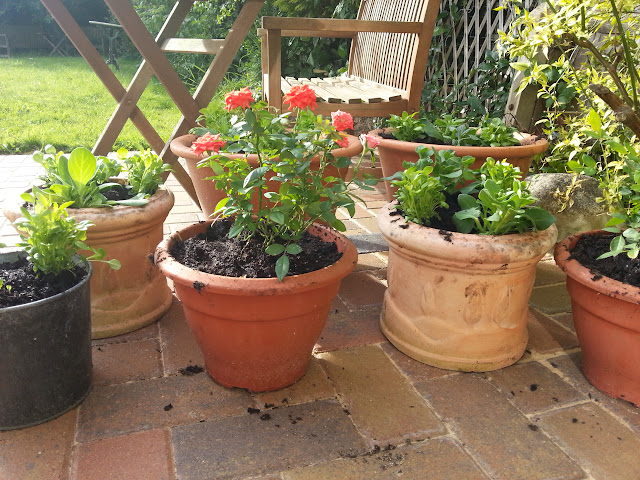 Meanwhile, the other planters have been placed here and there on the new patio;

The bay, hidden behind it the camelia I was given for my birthday, three agapanthus plants, and some rather  tentative parsley which has survived from last year 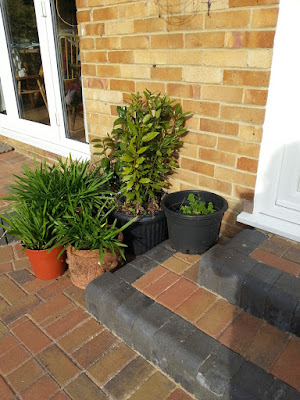 A rosemary plant, and a hellebore which was also a birthday present. 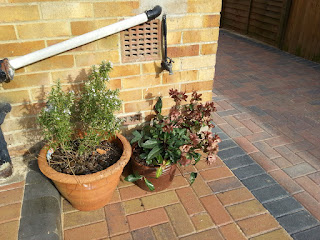 That tap will have to be fixed soon if we are going down the container garden route. There was a spectacular spectacle last winter, when the pipe feeding the tap split.

I had come in from work, filled the kettle and gone into the dining room (thinking "that's not the noise the boiler usually makes when it fires up"). When I returned a few minutes later, the kitchen was AWASH as in wet and watery and flooded. I found the stopcock for the outside tap, and was well underway with mopping up. Luckily, BB turned up as my first piano pupil of the evening was due in a matter of minutes. That's probably the cleanest the kitchen floor has been for a while. Fixing the tap has been a low priority until now.

Just as well, as the stopcock for the house had seized, but that's a whole new story and I can hardly even remember why and how it happened except that we had no running cold water and BB had to wait in for the plumber on Easter Day - oh yes, now it comes back to me; the cold water tap on the kitchen sink stopped letting any water through on Easter Saturday. Had to fill flasks and jugs round at the neighbour's house for drinking water. Sort of the same kind of episode as when the fridge freezer gave up its mortal coil one Christmas Eve, signifying its demise by pouring its life-fluids all over the floor. Or when the cooker went BANG quite literally one Christmas Day (2012, a momentous year) as we got the turkey out. As they say, timing is everything.

On a cheerful note, here is the pot plant that the offspring gave me for Mothering Sunday this year; 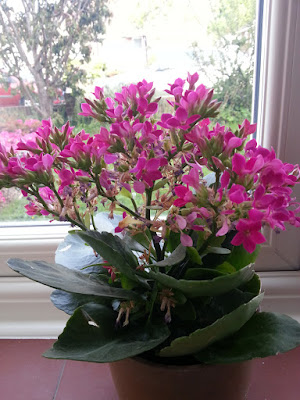 It's looking good, isn't it!