... so on the way home from Lowder Mill we called in at a garden centre close to home to investigate the feasibility of our ideas.

The new patio has left an unsightly triangle-ish patch of bareness where we changed the shape.


So the options are

Grass - not as straight forward as you might think. Getting it level and sort-of-matching the existing weed-infested "lawn" looks to me to be a tricky business. So I wasn't that keen.

Flowerbed - you mean the sort that fills up with weeds, like the ones we've already got? That patch is already infested with horsetail, which can't be weeded out, so dealing with it in a flowerbed would be a nightmare. Hey, that's nearly a sort of pun!

Horsetail wouldn't be such a pest in grass, as it gets discouraged by frequent mowing. Oh, wait, how frequent is frequent? Ah.

We could fill the flowerbed with densely planted low-growing shrubs, which would hide the weeds. I have been eyeing up the roundabouts and verges to see what the council have been choosing.

A pond? No. That means frogs, slime, toads, clearing the pond, blah blah bleah.No. Oh, I said that already.

A "feature". Ah, yes, but what kind of feature? Something smart, attractive, unpretentious, useful, low-maintenance. Does that just about rule out everything? Well, maybe not.

At Lowder Mill today they had a vegetable garden made entirely of raised beds;

Today it didn't look like this as it is far too early in the season. However what they did have looked most attractive, and easy to manage - alternating rows of red and green lettuces, herbs and marigold flowers. Very pretty.

So I think our plan is going to be to cover the bare patch with a weed-suppressing membrane, topped with a layer of pebbles. We've got our eye on something like these "Premium Scottish Tweed Pebbles" which look like this (that's him standing on them to give a sense of scale). 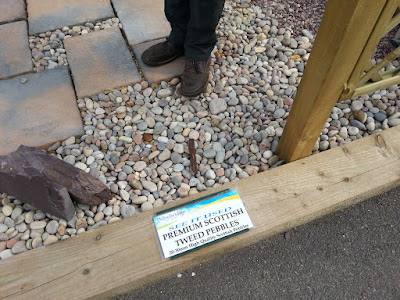 Then, on top, we could put some of these half barrels to be "instant" raised beds and what ever other containers look suitable (that's him measuring across the top with his arm to give an idea of the size) 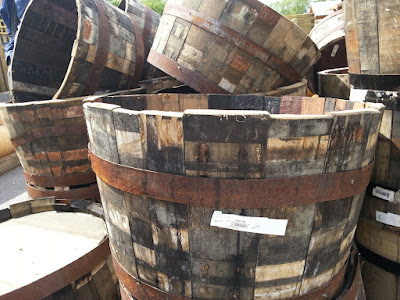 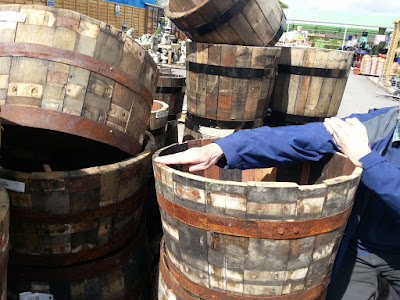 I reckon that would work. Then, maybe, as if by magic, they would become something along these lines

Watch this space...  but be patient. This could take some time.