Wednesday 29th May - Catching up with ourselves

Today was a blissful 'not talking to people' day for me;

We don't visit my Godmother in hospital every day, and today was a non-visit day as he had an appointment elsewhere.

That made it a later start this morning. For some absurd reason, I suddenly decided to wash down the walls in the kitchen over by the cooker. I think it was because I was so impressed by the 'BANG! and the dirt is gone!' spray that I used in my godmother's kitchen a the weekend that I thought it might possibly work the same wonder on ours.

And wow! I'm glad I was wearing my marigolds, otherwise it might very easily be 'BANG! and your fingers are dissolved to nothing!'

It is Powerful Juju, as Kipling might say. I do apologise for this but I just had to take a photograph; Just Look At The Shine On Those Taps! Like new, that's what. I used the degreaser to clean the windows, that was pretty effective too, although I need to wait for the sunshine before I do a proper gloat.

Himself dropped me off in town on his way to The Appointment (dentist, if you are curious) and I had a rare day of going round the shops All By Myself. I kept the spending spree to a reasonable minimum - one packet of socks (I came to my senses at the checkout and put the other packet back), and two metres of satin ribbon and a leaflet about turning them into roses (why? - I don't know. My senses deserted me at that point, but ribbon is only 70p per metre).

I also spotted something that I had been keeping an eye open for, well, both eyes actually, I'm not good at winking. The sewing/wool shop had a ex-display cardigan, knitted up by one of the shop assistants to show off the yarn, reduced from expensive to reasonable. My godmother has been feeling chilly round the shoulders in hospital, so this might work as a sort of bed jacket.

The other sort-of-success this morning was getting my hair cut. I'm not totally convinced with the result, but then I never am. Maybe washing it will sort it out.

When we got home, the 'urge to clean things' was still strong. So, I tested out a suggestion that Brown Sauce makes a good job of cleaning brass and copper. I can report that this is definitely the case. I can add that out-of-date balsamic salad dressing also works well, but leaves a bit of a greasy film, easily dealt with with hot water and washing up liquid. Somewhere there is a joke about using HP Sauce (Houses of Parliament Sauce) to remove grime and tarnish... 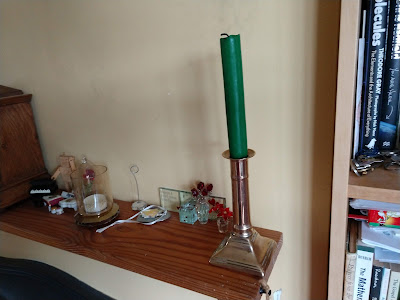 Although my hands now have a faintly detectable odour of brown sauce and balsamic dressing, I find that infinitely preferable to the stench of 'proper' brass and copper cleaner.

I suspect that all this cleaning is a diversionary tactic to avoid report writing. I've done the first 4; just 12 more to go...

My needlework reports from prep school were roughly the same as Roald Dahl's Latin.
Posted by KirstenM at 17:32:00