When we had the garden border done I specified that I wanted to have something to look forward to every month of the year.

Of course the success of that does depend on going out into the garden so that I don't miss anything...

At the moment I still don't know what most of the plans are called - but now that I have handed over communications with the gardener to Himself there might be some more information on that score. I've discovered that my patience has run out... so stepping back is a Good Idea.

Anyway, I went to have a look this evening; 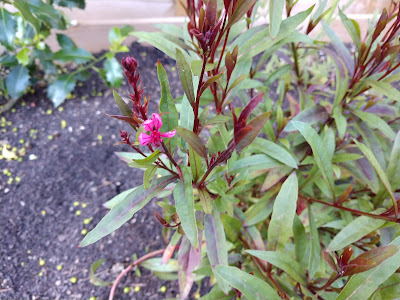 The bottom of this picture shows a little lavender plant coming into flower - I remember asking for lavender... I've got another bush in a small pot which needs planting somewhere more sensible at some stage. 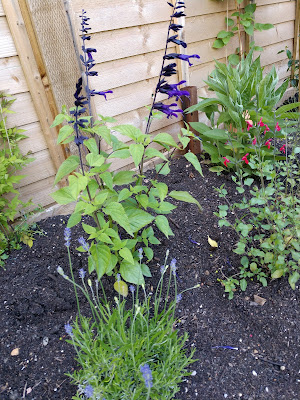 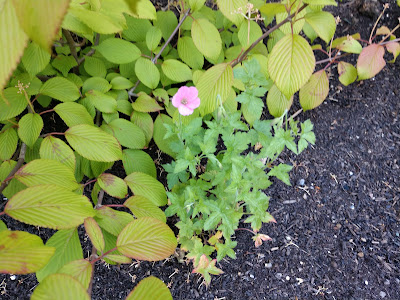 Look at my strawberries! I've never grown them before. There all came from friends in Northern Ireland; we brought them back as small pots last Summer and I just shoved them all into one of my vegetable tubs. Sunday's task is to net them against the birds. 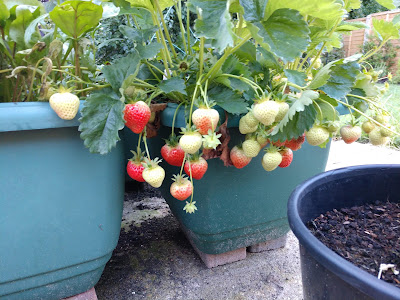 This little pot has a 'rescue' miniature rose. There were two pots each with two dried out and dying rose plants in Waitrose last Summer, for just a couple of pounds each. They are still not in great shape, but this one has a most enormous bud.  Potting them all up looks like being another job for Sunday. 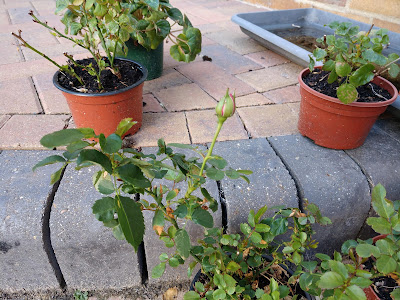 It's been a gruelling couple of weeks, well, months. We are coming out of the worst; it feels like a lull before the next crisis, whatever that may be. There are still a lot of uncertainties regarding my godmother's future, and we are still going up at least once a week when we can manage it. She's back on form now, though, looking after herself just like before all this blew up.

However I have to admit that I seem to be in a 'one step forwards, one-and-a-quarter step backwards' phase; one day I will be well organised and deal with a myriad of tasks, and the next day I will mis-read a email and totally, but totally, fail to turn up to a school (I thought they had cancelled, no, no, they meant NEXT week!). I'll sleep like a log one night, and be wide awake listening to the World Service, or 'Slow Radio' podcasts for the next two. Hey Ho. Himself is in  a similar state same, so we prop each other up as we make our shambolic way through the week.

Never Mind. Things are changing, and there are extra 'Catch Up With Yourself' moments along the way at the moment; muddling up the school means that I will have had TWO unexpected free afternoons this month, and also Friday evenings are free as there are no Drumming workshops in June. We're just spending this evening watching television with our eyes closed....
Posted by KirstenM at 19:50:00

Email ThisBlogThis!Share to TwitterShare to FacebookShare to Pinterest
Labels: catching-up, flowers, gardening, too much to do