Last night, as I was in that pleasant half awake, half asleep state, the books I am reading all merged themselves into a confusion.

Which books am I reading?

Miss Garnet's Angel, by Sally Vickers - I read it several years ago on the recommendation of a friend. I find I have forgotten almost all of the plot. All I can remember is that ever since I read it I have wanted to go to Venice, which is the setting for the story. This means that I can enjoy it all over again, with no idea of how it is going to turn out. Because it is Venice, and the story of Tobias and the Angel is interwoven in the plot, there is a lot of visiting churches and musing on Angels and other aspects of religion and life and so on along the way. 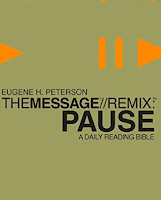 Remix - a 'Bible in one year' plan, using the Eugene Peterson paraphrase called 'The Message'
I don't know how well I well get on with this. The last time I did a 'Bible in a Year' scheme it took me two years, with a a lot of skim reading through Leviticus and Numbers. I'm most of the way through Numbers, and also part-way through Romans ( you get a chunk of Old Testament and a chunk of New to read every day). Well I confess I have been skimming again., although every so often they stop detailing Wave-offerings and Peace-offerings and all the minute details of the law, and a story that I recognise suddenly appears. Last night I came across the story of Balaam's ass, and I now realise that I had confused it with a fable of La Fontaine. Balaam's ass features Angels. I waited in vain for the donkey to be loaded with salt and repeatedly lighten its load by falling in a stream, whereupon the owner loaded it with sponges to teach it a lesson. That must be part of the fable.

Letters to Alice; on reading Jane Austen by Fay Weldon. The only Fay Weldon I have ever read. It is a series of letters, as the title say, and as well as discussing Jane Austen's novels includes all kinds of ideas on what being a writer is all about.  I'm reading it in smallish chunks as there is a lot to think about.

Stephen King's famous book 'On Writing' which is frequently recommended as a guide for aspiring writers. Part autobiography, part guide, it is another one to be read in small chunks and pondered.

and The Cloister Walk by the American poet Kathleen Norris. I've had this book on my shelf for ages; someone I follow on twitter was offering it to anyone who wanted it, as he had two copies and wanted to give the spare away. On the basis of his recommendation I asked for it, but then it kind of sat about for some years. Now seems to be exactly the right time for the book. She is documenting a year in her life when she is writing and lecturing at a University and also staying at a Benedictine monastery which her husband is away on an extended trip. The substance, so far, seems to be observations about the monastic and spiritual life as well as what it means to be a poet.


While this looks like a weird mixture of books to be reading all at the same time, there are threads which interconnect them and twine together in ways I hadn't planned or bargained for. Which is why the whole lot of them got completely wound together in my head last night, so that I had to make myself wake up a bit in order to sort them all out again.

I've got Educated by Tara Westover, and the New Testament letters written by John  and Jude queued up for the two book clubs I am in, with deadlines approaching in a few week's time. I am determined to finish Miss Garnet before I start anything else otherwise the situation tips over from ridiculous to plain insane. (Although I might pick up  Miss Read's gentle and easy-going Village Diary for a bit of light relief over the weekend...)