I'm off out in an hour or so, and when I get back it will be too late for me to stay up and do a Na BloProMo post.

It's Book Club Night (not to be confused with Bible Book Club Night!). Recently I haven't managed to finish the book for Book Club, but this one is a riveting read, although quite, quite horrifying. It is 'Educated' by Tara Westover, and if they made it into a film there would be so much outcry. She was raised at home, in Idaho, as the youngest daughter of a Fundamentalist Mormon family, and her father was committed to preparing for the 'End Times'. The fact that he probably has bipolar disorder increased the chaos of her life.

She, and some of her brothers, managed to 'escape' from that life, through education, in her case Brigham Young College and then universities, including Trinity College Cambridge.

Her writing is memorable; the descriptions of the country she grew up in, and also of the mad and insane life that she led are extraordinary.

On the whole I am glad I read it, although some of the scenes will stay with me for very uncomfortable reasons. I would recommend you read some of the reviews before embarking upon the book, so that you have an idea of what to expect.

I returned to an old favourite, 'Village Diary' by Miss Read in order to recover from the turbulence of 'Educated'. 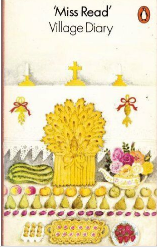 It rained on the way home in the afternoon - well, it's November, what do you expect? One of those rainfalls where the sky was blue in patches and dark grey over to the North. The sun came out, glaring off the puddles in the road and creating a great rainbow against the clouds. Sort of 'cheerful' rain, 'cleansing' rain. Good rain, not depressing rain. All the same, it was still wet.
Posted by KirstenM at 18:58:00