I keep meaning to order myself this album 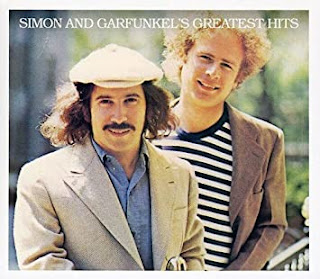 it takes me straight back to university days, playing the cassette that I had over and over again, radio-cassette player jammed between my pillow and the wall as I tried to get to sleep at night. The student in the adjacent room liked his music on loud, and the thump of the bass kept me awake, so I drowned him out with Simon and Garfunkel. It sort of worked - the thunk click of the auto reverse mechanism would jolt me out of my sleep, but not enough to wake properly.
Yesterday and today have been darker days; the summer sunshine has been interspersed with rain, giving the days an altogether gloomier feel.
Although yesterday was brightened up by cards and a pot of michaelmas daisies for our wedding anniversary 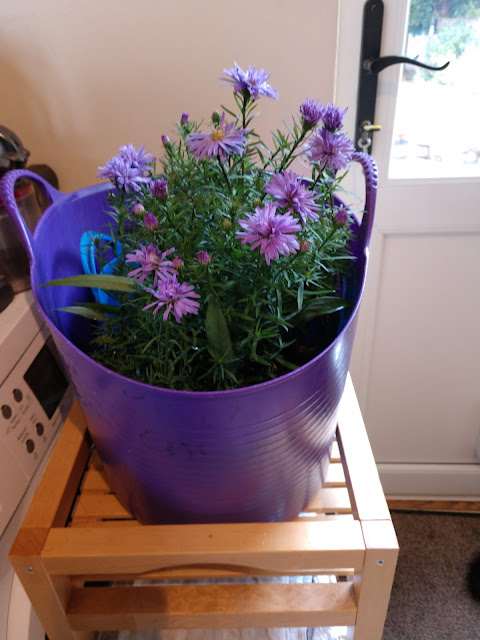 Still, I have an outing planned for later today - oh yay - but only to get my flu jab. So added to the complication of how warmly do I need to dress for the day is also factoring access to my upper arm for the nurse's needle. (In the end I chose short-sleeve shirt and warm sweater. And trousers, of course. No need for sniggers.)
Yesterday might have been a duller day, weatherwise, but I finished the crochet blanket that I started in April 2019 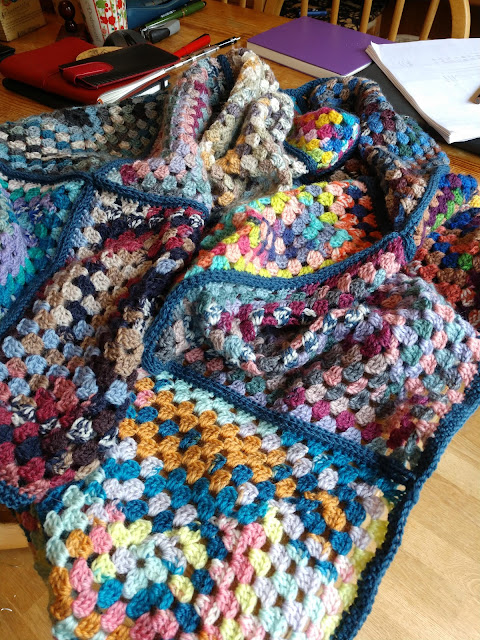 I walked into a wool shop in Havant, and was so bowled over by the vitatlity of colour in this yarn, that in the end I bought one of each colourway. I made a granny square from each ball - they accompanied me on our endless treks too and from my godmother in hospital or her house all through the year. When lokdown started I bought some plain blue and bordered each square, and yesterday I finished - every square bordered, all joined up, outside border and all the ends sewn in.  Now what? I do have two more blankets - lap-rugs, really, on the go...
A book I ordered about the mathematicians and scientists involved in quantam physics has arrived today, a blend of science fact and literary fiction. I bought on the strength of the reviews. I can understand why it got the reviews - the writing is compelling and I keep on reading, but the subject matter is graphic and vivid and fills my head with images that I don't want to see - we are nowhere near quantam physics yet - but it seems that the history of the development of the pigment 'Prussian Blue' interconnects with the holocaust and I'm feeling unsteadied by this because I use that colour all the time. I've set the book aside - I need time to think about it before I read any more. Or don't read any more.
The list of books waiting to read, and part-read, keeps on growing. At the moment I am partway through
The Man who was Thursday - G K Chesterton
Christ stopped at Eboli - Carlo Levi
The Little World of Don Camillo - Giovanni Guareschi
I Saw Two Englands - H V Morton
On Chapel Sands - Laura Cummings
Understanding the Crucifixion - Fleming Rutledge
Short Stories - In A Gernam Pension, In the Garden - Katherine Mansfield
which is utterly ridiculous. My friend said she was in the same situation and told me she 'had to put a stop to that'. I think I will too.
I am behind on my paintings - I'll get on and do one later today.
Thursday 17th September - I was listening to a radio interview with David Cameron, and there were stills of the interviewer and DC on the screen of my tablet. I was mainly listening for the bit where DC said that he said he got rid of Dominic Cummings twice but he kept coming back. 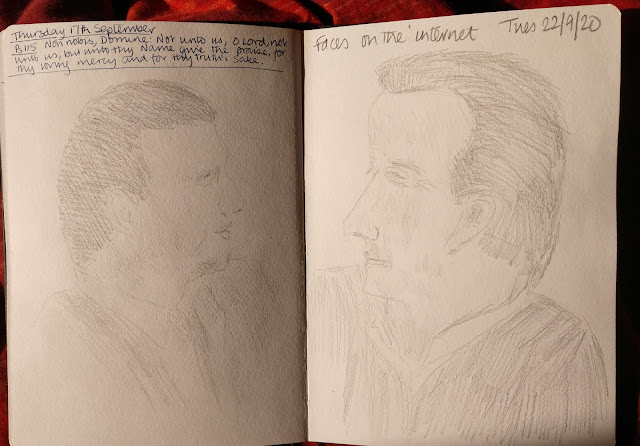 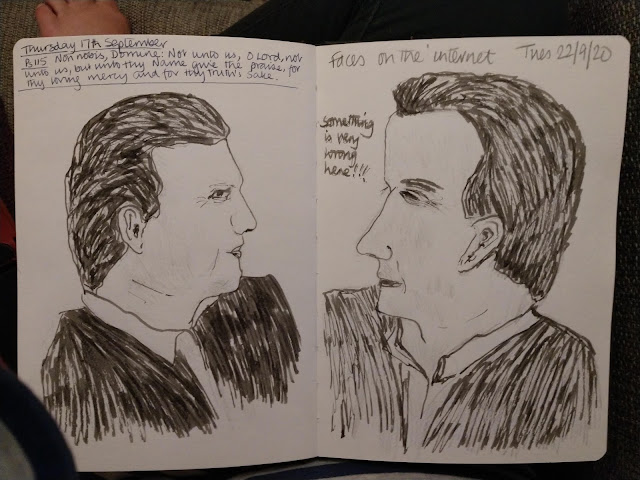 On twitter I saw this photograph, titled 'My Dad, the stonemason, sharing his lunch with a sparrow' 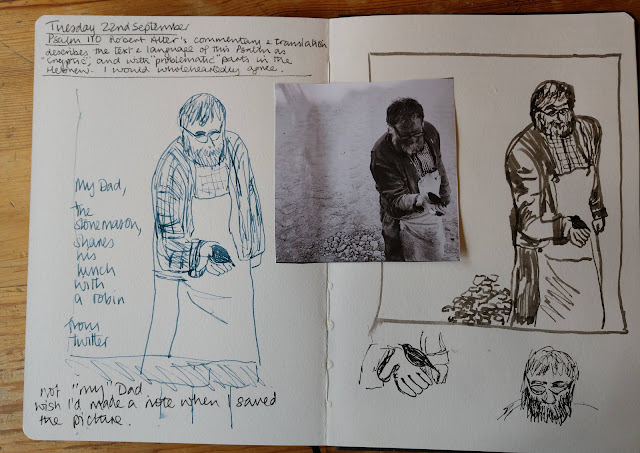 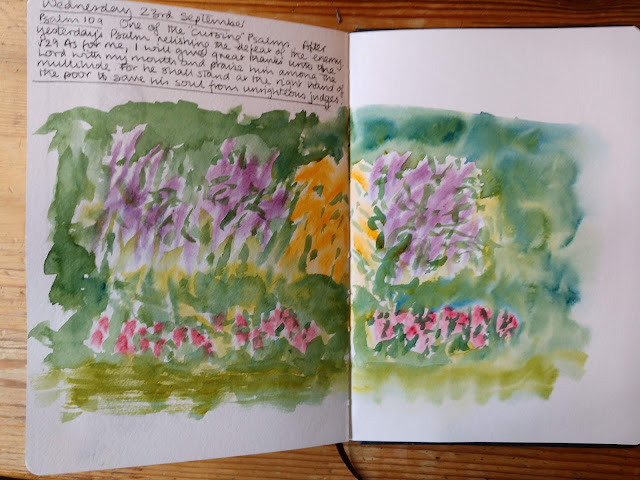 Which I quite liked, but I had always intended to go over it once the paint was dry, and I like the drawn on version better. 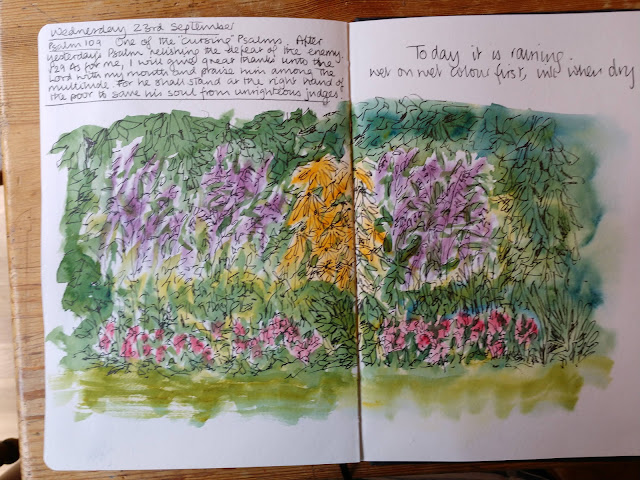 Hey ho, nonny nonny no,
the rain it raineth every day...
well, no, actually. But it seems like it at the moment... cup of tea always makes things better!
Posted by KirstenM at 14:32:00