I am now four days behind on painting. Which just goes to show how long a committment to a new project lasts for me, although I have been following a prayer book for ten weeks now almost consistently, and reading a Psalm a day for 48 Psalms. I started at 150 (the last one) and am working backwards. Some days I have read two Psalms - it seem cheating to only read the one when it is just two verses long. Other times I have spread the Psalm - 119 in case you hadn't guessed - over three or four days.

I am become like a pelican in the wilderness, and like an owl that is in the desert. I have watched, and am even as it were a sparrow that sitteth alone upon the housetop

I am reading them in the prayer book my godfather gave me for my confirmation, in the King James version, which is why I encounter dragons and leviathans and, today, a pelican. Other translations, which turn the pelican into 'I am like skin and bones in the desert' are rather ordinary by comparison.

I am being driven crazy at the moment because I am knitting a cabled rug, with 200 stitches, using a circular needle instead of two straight ones. You don't have to knit ruond and round in circles on a circle needle, you can just go back and forth, which is what I was doing. But, in an absent-minded moment, I just carried on instead of turning the knitting around, and joined the two ends of my knitting into a tube. 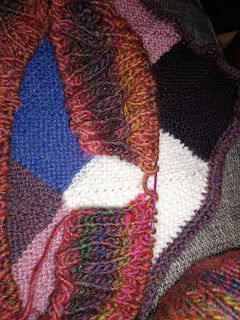 This has made me very unhappy, as I only discovered the calamity after about 190 stitches and having done several cabling thingies. I did briefly consider cutting the offending link, but the little bitty yarn wouldn't be long enough to sew back in securely and I would only be storing up trouble for the future. I have nearly finished 'tink-ing' the stictches. Tink-ing is un-knit-ing, stitch by stitch, much safer than 'frogging' , which is sliding all the work off the needles, pulling out the yarn and then trying to get the stitches back onto the needles without them running back down into ladders.

Himself went for a haircut yesterday - the first one since March. It is a great improvment. It is astonishing how much the state of one's hair can affect your state of mind. I haven't had my hair cut since February, but at least I have had the assistance of hair slides and gel to try and keep my fringe out of my eyes. Not things that Himself would feel as comfortable with?

Pictures - these are the latest... I still have blank pages for Monday 21st, Tuesday 22nd, Tuesday 29th and today. I'll catch up at some stage.

Friday 25th September - random seascape, partly because of the day's Psalm 107, 'They that go down to the sea in ships') 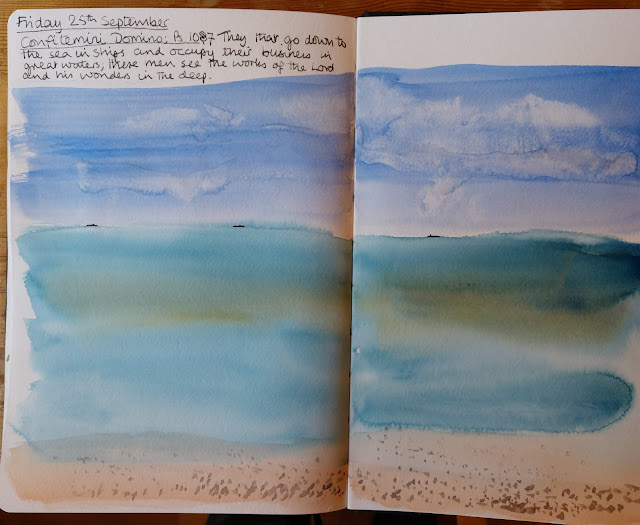 A selection of finger puppets which are jammed into an old mug. The mug has a broken handle which is why it is now a finger-puppet-storage-facility, but I put a handle in the picture because it looked odd without it. 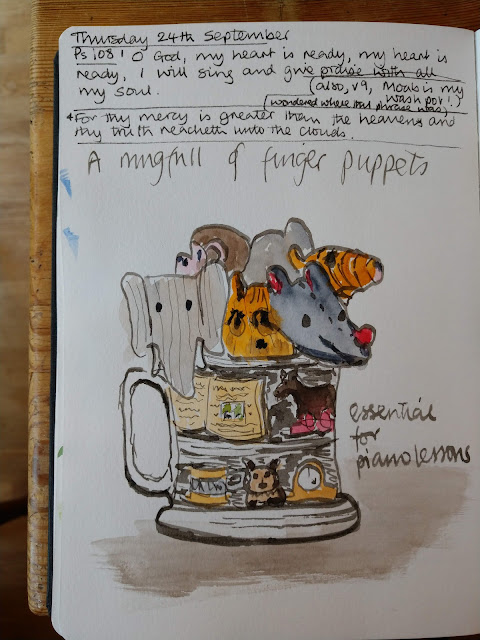 On Saturday 26th September we went for a walk along the River Adur near Steyning as far as a tiny hamelt called Botolphs, once a thriving port back in the 1400s. The church is in the charge of the Churches Conservation Trust, and was open so I was able to go in and look around. 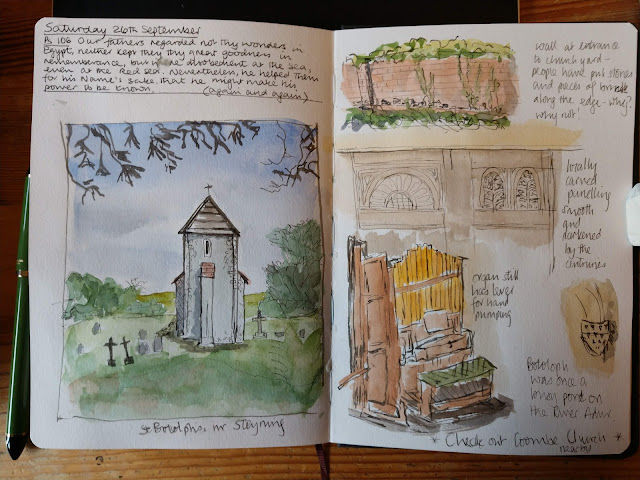 I had got so cold walking there. It was easy going along a footpath/cycle track, but there were so many cyclists swooping along at a great speed (obviously not there for the scenery!) that we had to keep taking to the rough verge and waiting for them to pass and the wind began to freeze the marrow in my bones. So Himself left me at the church and walked back to the car (half a mile,10 minutes) and then navigated back across the river through twisty turny lanes (several miles,20 minutes) to collect me. Meanwhile I found a sheltered spot to wait and take photographs and do one sketch in a little book I carry for the purpose.

The sketch became the landscape below; 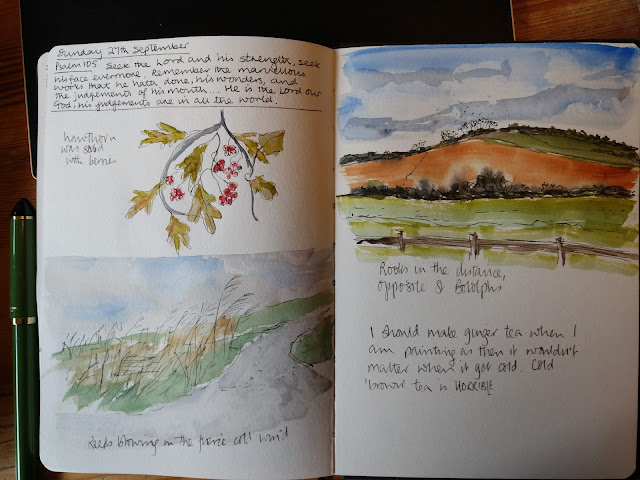 On Monday I looked back over the years on my phone at pictures from about this time of year and chose a couple. 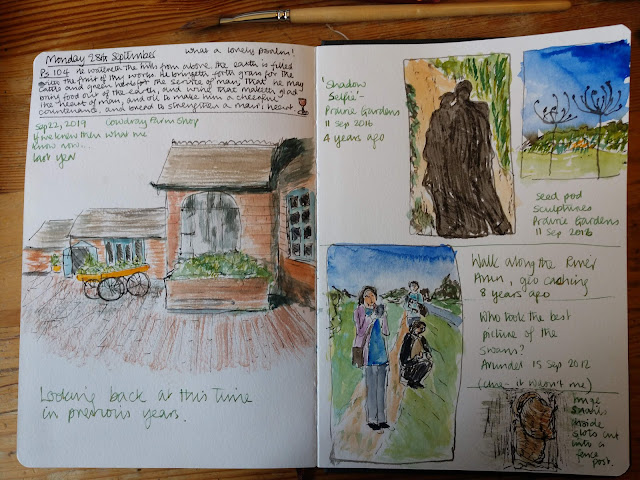 Next month is 'INKTOBER' - something new! I notice I have a file (rather empty) labelled Inktober 2019 on my computer from last year. I shall have another go at it this year and see if I can keep it going. I don't know if you are allowed to join the 'event' if you colour your drawings... do I care? No, not really.

Monday was also the start of the teaching week. I fetched out my little owls to show where the chords are on the piano for one child who was struggling to work out what to play in a rather quaint piece called 'Lazy Bear'. I made up a little story....

Here are all the owls sitting nicely in their A minor chord places. 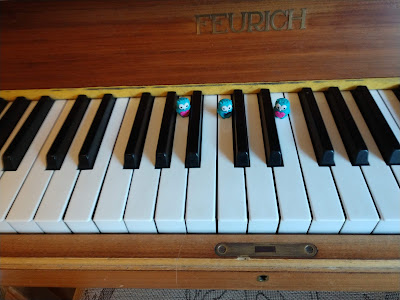 Oh look! one of the owls has leapt up to see what the other owls are doing! 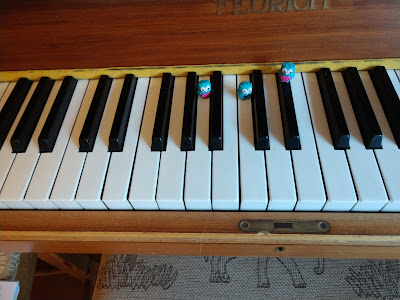 Would you believe it! He's just farted! He has jumped back onto his A minor place because he was all embarrassed, and the other owls have moved one semitone away. 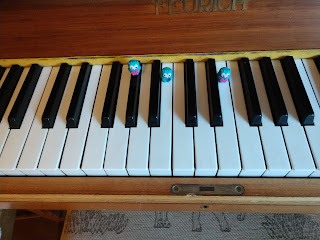 I did whisper the work 'fart' because I do know it is neither polite nor musical term. But I'm hoping that the story will help her remember the chords. I could always have said 'A minor, followed by A minor diminished, and then E major (chord V, the dominat of A minor, don't you know) in the 1st Inversion'. Somehow I don't think, at 9 years old, she would have found that as memorable.

Enough lavatory humour. Time to do something useful.