Tuesday 20th October - To Do Lists

I reckon to-do lists are

helpful to keep on top of things

a bit of a bore

a total waste of time

It all depends on - well - things. How I feel. How much I have got on my mind.

I've reinstated them after a couple of week's break, and it is noticeable that updating the blog has appeared as a recurring item for a while now.

What has happened since the last post - hmm. To quote number one daughter; 'same old same old'. Which is a hugely unsatisfactory answer to be on the receiving end of, but, actually, pretty much describes things. Piano teaching, trying to do a drawing a day, thinking about going out, but not actually making it out of the front door because it looks cloudy or cold or as if it is going to rain - life is full of excuses.

We did go and see the sea a few days ago - everything oddly shiny silver grey - depending on where you looked at the horizon, the sea was darker than the sky, or the sky was darker than the sea, or they were the same colour and you couldn't tell where one stopped and the other began. It was a Saturday afternoon - the weekend isn't a good time to go out as everyone else does the same, so walking along the path is a complex series of chess moves. It is noticeable how attitudes to giving each other 2m, or even 1m, space have changed over the past month.

The garden is my salvation. It is full of surprises; the climbing nasturtium seeds I planted back in the summer and gave up all hope of have made it to the top of the fence, forcing their way through the passion flower vine and are now flowering. I suspect they have gone over the fence to next door for a quieter life, rather as Tigger the cat used to go next door (to the other side) when we had visitors with small children. 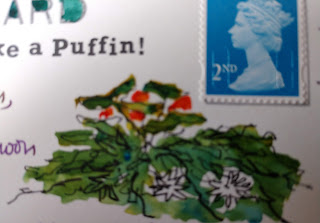 I shall go and walk the card round to the post box card once the paint is dry, and I've finished typing this blog post. Hopefully the threatened rain won't happen until after I get back.

Christmas is in my thoughts now. I shall have to think about teaching Christmas Carols again - Jingle Bells and all that - soon after half term. Half term will start on next Saturday afternoon (I have piano zooming in the morning); I have managed to get hold of a lino-printing kit which I am desperate to get stuck into (literally!) but am restraining myself until I have the time and space to give it my full attention. We did lino printing at school a hundred years ago when I was about 12, and I've always wanted to do it again. The sound of the roller going over and over the deliciously tacky ink - ahhh.

I've got 'making a list of ingredients for home-made mincemeat' on my to-do list, for the next grocery order. It's a long time since I bought mincemeat as I have found most of the brands, even 'luxury' once sadly disappointing. Th same goes for bought mince pies - but I'll eat them rather than go without!

Right. Time for the gallery - so if you like you can click away to something else now... 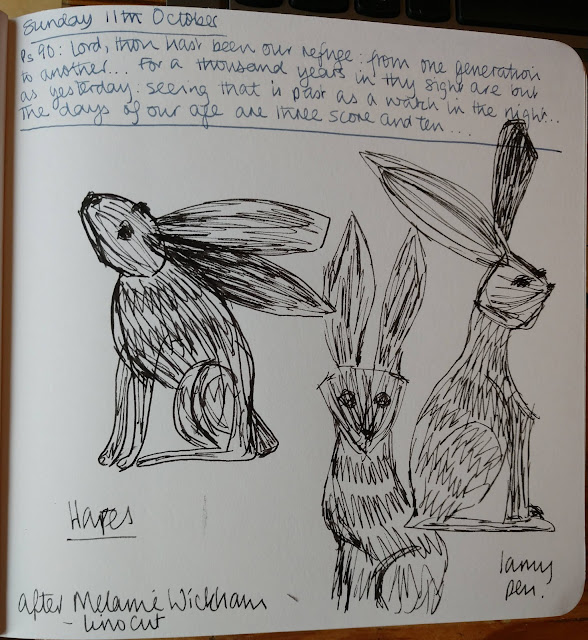 I thought I'd see whether washing over the ink drawing would improve them; 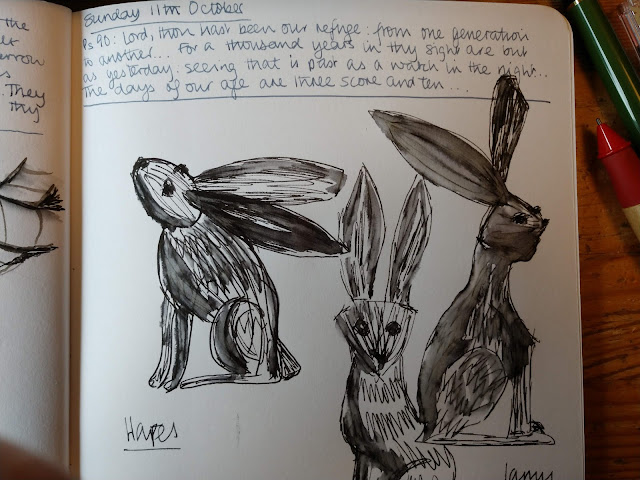 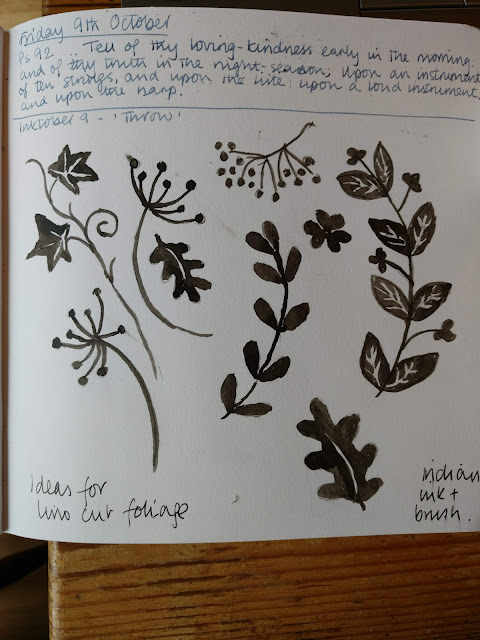 There are two pages for the prompt 'teeth'; this is the second because I wasn't pleased with the coloured one of the zipper 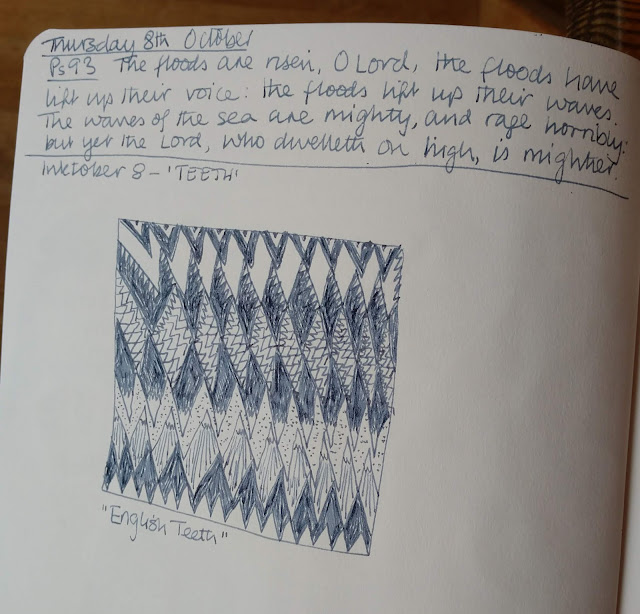 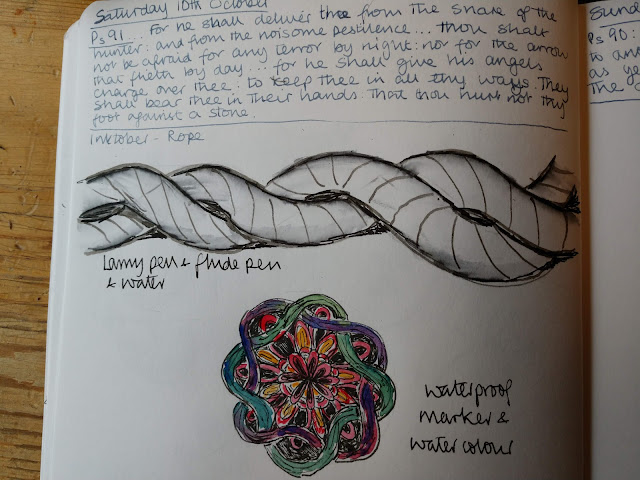 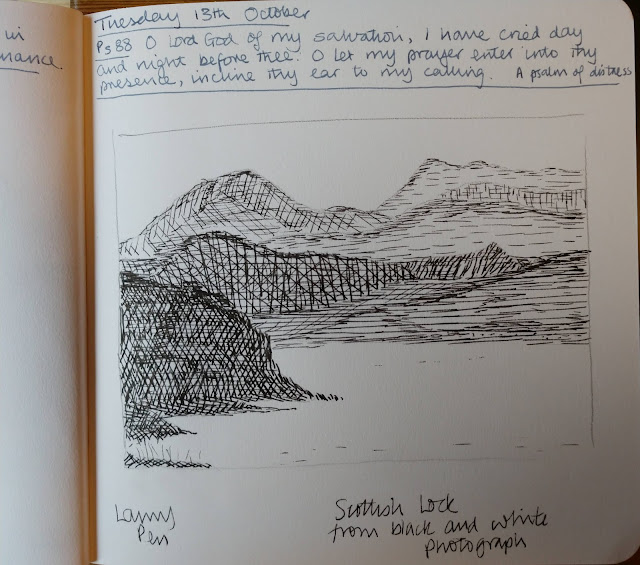 This is the first picture I did for 'teeth'. 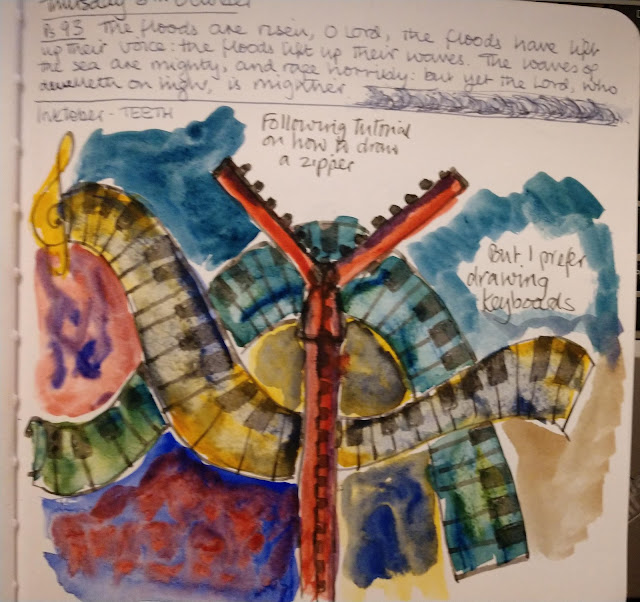 It was around this time I gave up on the prompts and decided to go my own way! 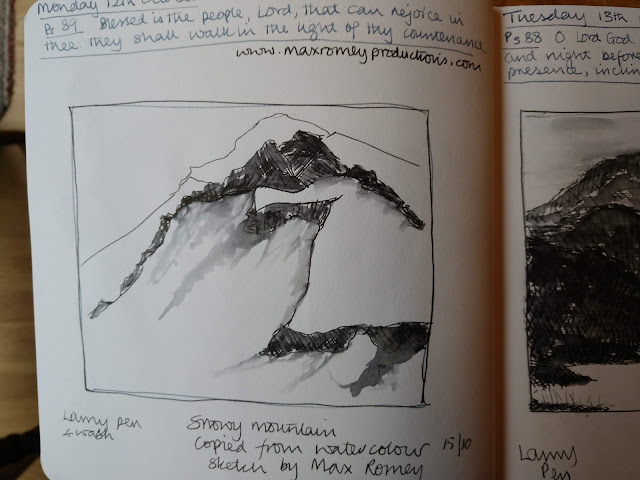 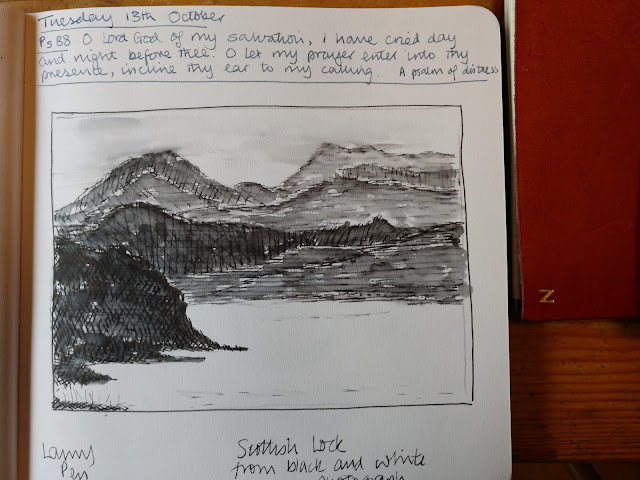 This page unintentionally left blank. I might fill it up with something at some stage... 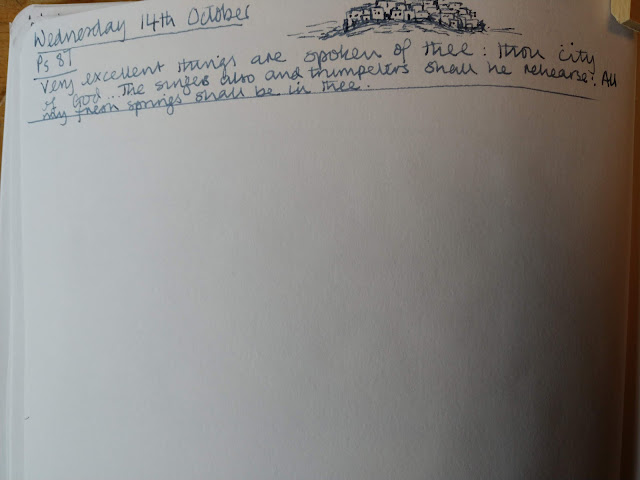 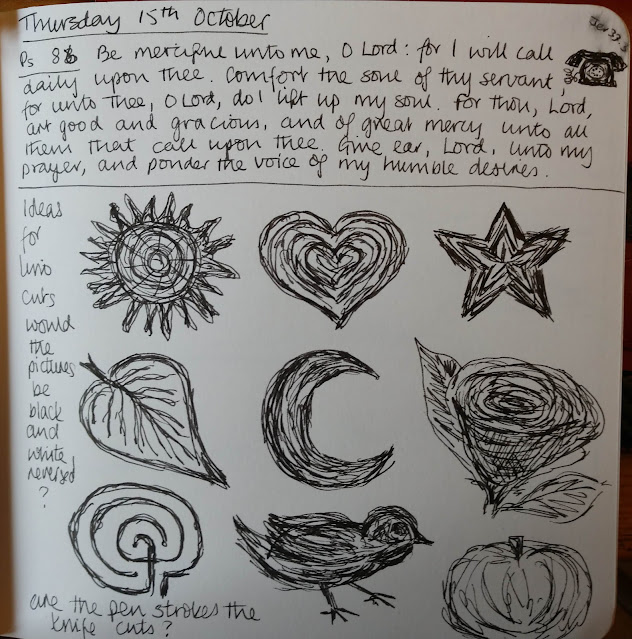 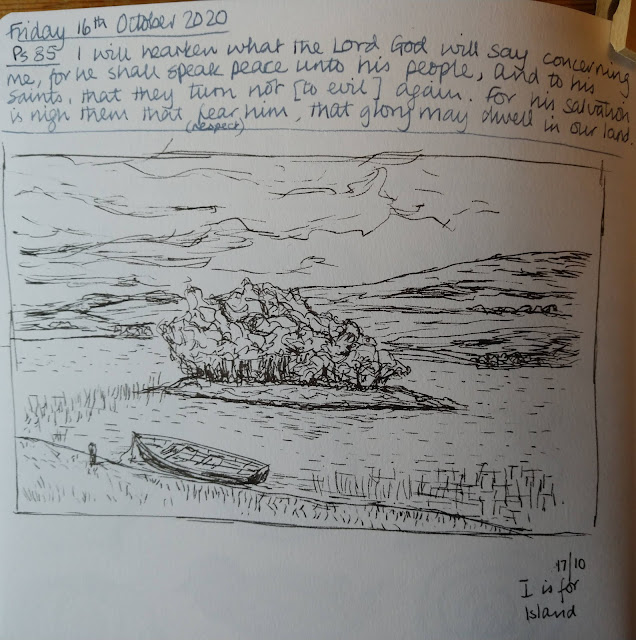 We had beds a bit like this (smaller, and plainer) at boarding school, with horsehair mattresses dated '1943' in laundry ink at one end. 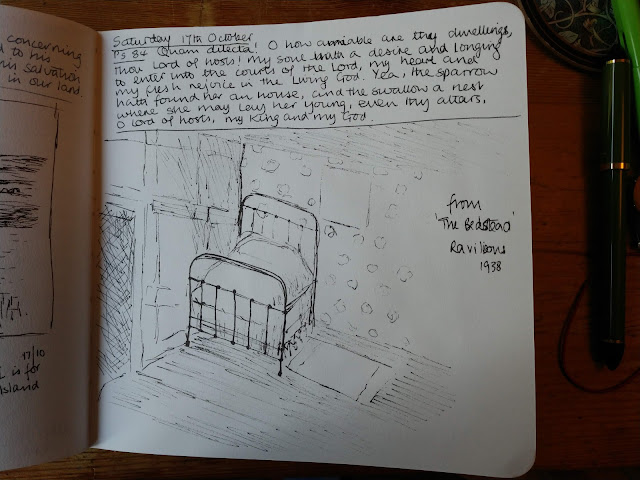 The day before yesterday 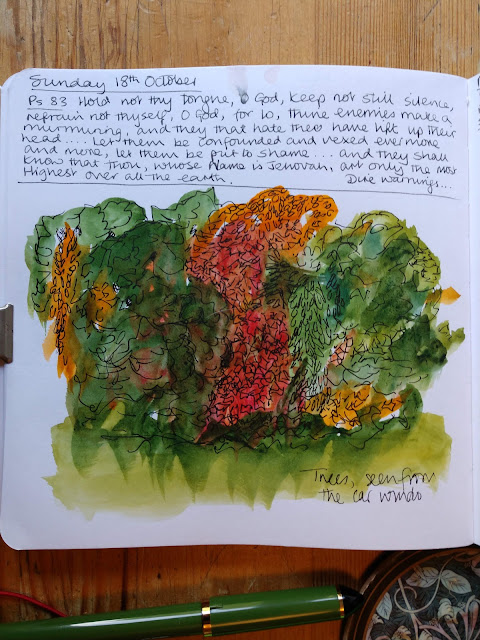 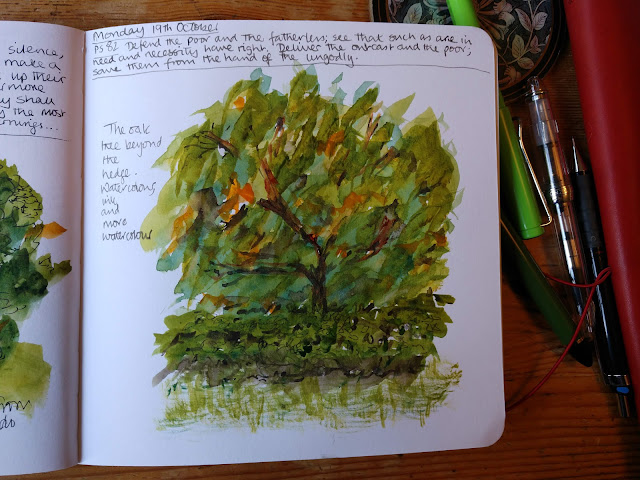 and today. On youtube there is a version of 'My heart's in the highland' Robert Burns, set by Arvo Part, which is bleakly beautiful, and I copied this from the black and white photograph accompanying the recording as I listened. 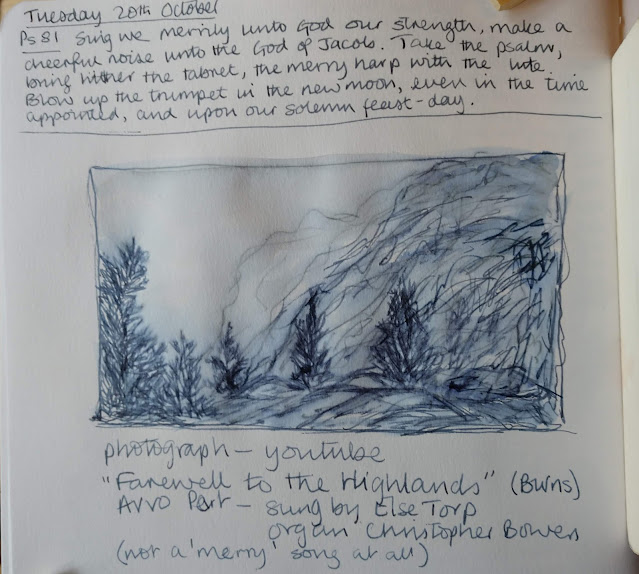 Right. Coat and hat and gloves and scarf and go and post that letter.