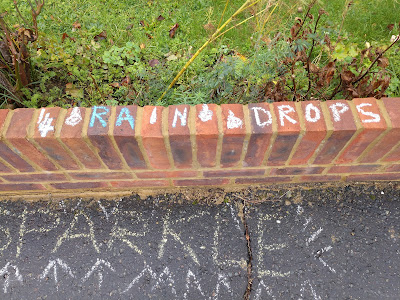 Rain has been dropping out of the sky for most of the day.. I nipped out at about half past nine in the morning to chalk up the word, at a moment when it wasn't raining.

Later in the day there was another less rainy moment. Himself went for a brisk walk round the block, and I took secateurs and bucket outside to tidy up the plants which were trailing over the wall, and cut back the last dead flowers on the rose bush. All the writing on the pavement and wall had been washed away.

The cats took a dim view of the weather 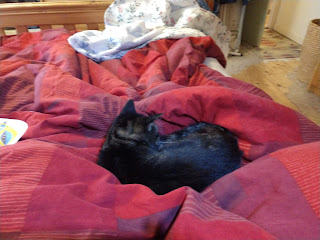 McCavity has just four or five doses of the horrible probiotic paste left. It is a two-person job; He holds her firmly and I attempt to squirt the paste into the side of her mouth, and she chews and chomps at the plastic nozzle of the dispenser. She has managed to chew through nozzle twice; it is reassuring to know that her teeth are still functional; but I have had to trim the damaged part of the nozzle away each time. If she continues to wreak this destruction, she may end up going without the last dose or two. I don't think she is clever enough to have worked this out in advance.
Yesterday's word, procrastinate, seems to have taken over today as well. The list one things that I haven't done is quite impressive.
Ah well. Tomorrow...
Posted by KirstenM at 20:34:00