I ordered tulip bulbs, not from Amsterdam, but the packaging did say they came from Holland (what will happen to tulips after Brexit?).

Today was The Tulip Planting Day 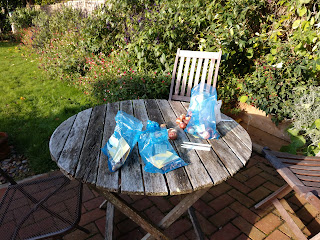 They have been sitting around for several weeks waiting for me to get 'a round tuit', something like this 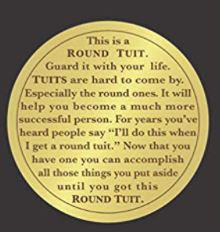 Much beloved of  a certain type of souvenir shop.

Procrastination was not only the thief of time in this case, but also of tulips; one had become noise-some and squishy and could not be saved.

It was decided that what was required was a dibber; so that was the first stage of the exercise, requiring various contents of the tool box. 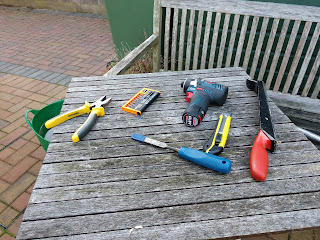 You can't see the energetic application of the business part of a bow saw; that is out of the picture (obviously). So, a useful exchangeable rake-sort-of-thing was removed from a redundant exchangeable handle, which was converted to dibber-duty by have one end turned into a spike. The proved to be absolutely the implement for creating a series of vertical burrows for the English Bluebell bulbs I have also ordered, though I am a little concerned that the holes might turn out to be too deep. Time will tell.
In the end the dibber proved to be less useful than the narrow trowel for planting a score of tulips in amongst the remaining flowers. I was a little sad that I hadn't ordered more bulbs, but in the end we were very grateful to stop grovelling around in the dirt as soon as we did.
My other good deed for the day was dealing with a week's worth of coffee pods. The grounds have gone into the compost bin, and the aluminium cases into the recycling. 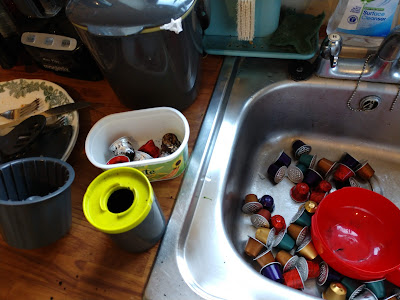 Right. What I am really supposed to be doing is finishing off writing up the three piano lessons I taught this morning, emailing the notes and a whole slew of music, and clearing the decks ready to do some lino cutting.
Where have I put that round tuit?