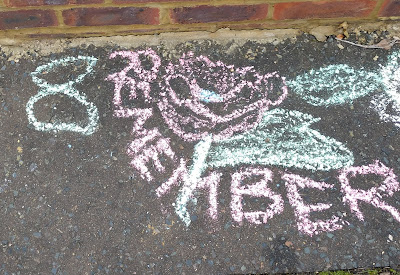 I also drew these today 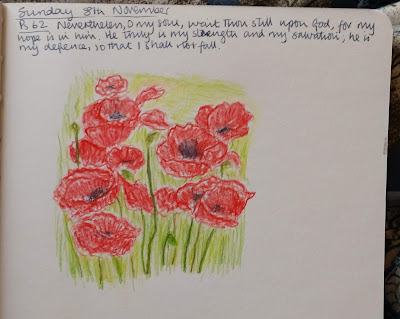 The inktense water pencils I used have a shade which is helpfully labelled 'poppy red'.
My grandmother's younger brothers were both killed in the First World War.
I'm reading a book called 'Nella's Last War', which is an edited version of the diary she wrote when she took part in the Mass Observation Scheme back in 1939 as 'Housewife 49'. It is a fascinating read; she lived in the shipbuilding community around Barrow, and it is more about her feelings and coping with her sons being away and her very busy but humdrum life as a housewife. Just as when I started reading 'I Saw Two Englands' by H V Morton back in the Spring, during the first lockdown, 'Nella's Last War' seems a fitting book for this second lockdown. Both authors are writing in the same period; but from widely different experiences and positions in society.
As well knowing about my great-uncles dying in the first world war, I also know someone who never recovered from his experiences in the Navy during the Falklands war, and at one point I was working with someone whose son was flying apache helicopters in Afghanistan during the height of the conflict.
It is all too close to home - I am so thankful to have been kept safe from having to live through war.