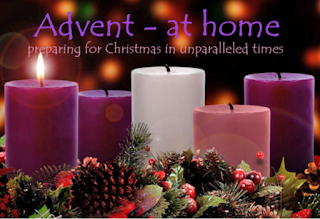 Once again Angela Almond is hosting a 'Pause for Advent' on her blog called 'Tracing Rainbows.

Only this time, when we are all 'paused' anyway, she is calling it Advent - at home.

I'm a member of a facebook group which joins together to read a book at Lent and Advent; this year the book is based on poems by R S Thomas, and the reflections written by Carys Walsh

And God held in his handA small globe.  Look he said.The son looked.  Far off,As through water, he sawA scorched land of fierceColour.  The light burnedThere; crusted buildingsCast their shadows: a brightSerpent, A riverUncoiled itself, radiantWith slime.               On a bareHill a bare tree saddenedThe sky.  many PeopleHeld out their thin armsTo it, as though waitingFor a vanished AprilTo return to its crossedBoughs.  The son watchedThem.  Let me go there, he said.

I had already copied this into my 'Commonplace Book' some months ago, when I first read it.

As I read this poem today, this time it occurred to me that if the Father and the Son and the Spirit are one God in three persons, then the person looking down at the Earth, and saying at the end 'Let me go there,' is God the Father himself. And the Spirit. And the Word, made flesh, (incarnate). All the Trinity, all at the same time, come down on a rescue mission. 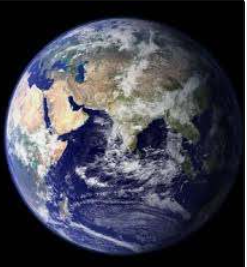