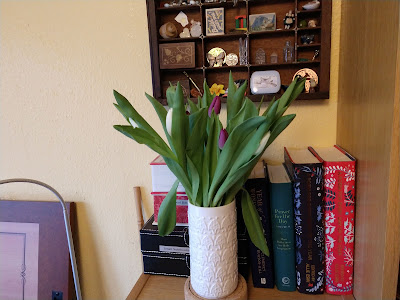 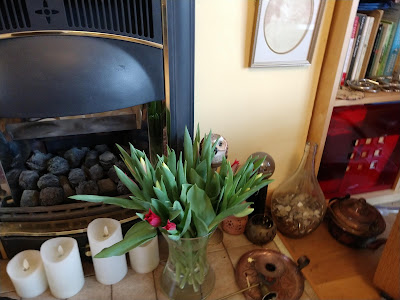 This evening most of the buds have opened and they are looking lovely. Thank you very much indeedy - you know who you are! I shall be enjoying them for a while yet.

The white vase was given to me, along with a dozen yellow and red roses, by Himself way back in 1978 to encourage me while I was studying for finals at university. We both knew that maths at university level was a bridge too far for me - I scraped through by memorising the theorems so that I could write them out for the first part of the question, and then I would make an effort to apply said theorem to solve some problem or other - inserting likely looking figures into the equations and doing things to them before moving on to the next question... I got a 2i or 2ii - can't remember which now - only because it was a joint subject degree with music. The flowers undoubtedly helped. Anyway, I always remember the pleasure I felt at seeing the vase and flowers all those years ago when I get it out.

Here's the rug I was talking about a couple of posts ago; 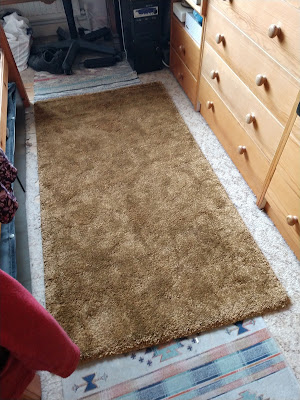 The plan is to cut and stick a number of these rugs together to form a floor covering of sorts for the bedroom. It has a much more luxurious pile than we were expecting, but we're not complaining!

'Visible Mending' has become 'A Thing'; there are loads of posts and tutorials and articles all over the internet. I thought I'd give it a try... here's a repaired tea-towel. I rather like the effect, and it is a lot easier than trying to do invisible mending. 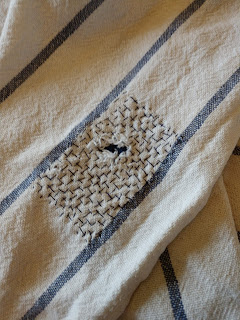 I've been shredding bank statements and credit card bills. It took four sessions over two days, (to give the shredder a chance to cool down!) to get rid of 2010 - 2015. I have a horrible feeling that somewhere upstairs, at the back of a cupboard, I will find the previous twenty years. I store things in boxes like these, usefully and truthfully labelled. Someone out there knows me too well. 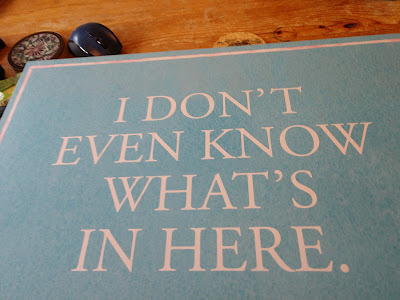 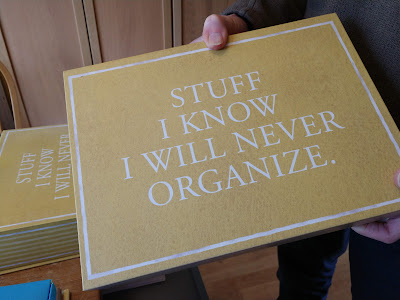 I have five boxes like these - I can't remember what the pink ones are labelled, nor hat it is them. It will be a surprise for me next time I go looking.
I was a little sad that the flowerbeds are so bare. We did try and plant tulips back in the autumn, but the beds were so full of flowers that it was a job to find any space to plant them. Now, of course, when the plants have all been cut back and all is bare, not the time for planting bulbs. Then I had a brainwave; Sainsbury's sell pots of tete-a-tete narcissi (narcissuses?) so I asked a friend to buy me 8 pots. I am hardening them off, and will plant them next week in the garden. 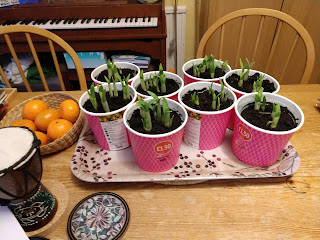 We've also bought a rosemary herb plant; meant to go on the windowsill and be used for cooking, but I've put it in a bigger pot and that too will go in the garden next week. 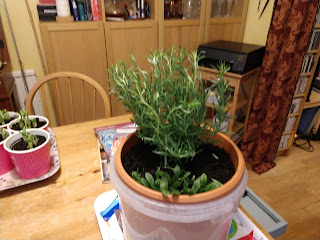 I have a feeling they are all still outside... but it is 9pm and raining and I'm not going out now. So hopefully they will cope tonight...
Were you hoping for real news? There isn't much, these days! We chug along from day to day, watching the world go by....
Posted by KirstenM at 21:16:00