It is very quiet here this afternoon.

There was a little flurry of activity this morning, when IKEA unexpectedly delivered half a dozen cheap (Very cheap!) rugs. We intend to 'cut and paste' them into a uniform surface for the bedroom floor, replacing a horrible mixture of floorboards, rugs and remains of ancient carpet in due course.

Receiving the rugs was not a big event. Breaking into one of the tightly wrapped rolls took some determination, but we proved to be stronger than the polythene and our reward was to see the rug spread on a patch of carpet/floorboard/rug. I think it will look good when they are all joined together.

No, the hard part was finding the double-sided carpet tape. After going through increasingly un-likely shelves and cupboards, checking the shed, standing in the middle of the floor and pondering, it was discovered in a pile of boxes waiting until their quarantine time had elapsed and we could open them.

People may wonder why we have put up with the bedroom carpet situation for nearly 40 years... that's because you don't know that in our first house we were too broke to replace the living room carpet,. where the pile had completely disappeared and all we were left with was black rubber.

In our second house we discovered that the bedroom carpet, (a pretty, but very old fashioned pattern of pink roses on a cream background) turned out to be cunningly arranged offcuts from the sitting room, and the narrow strip between the bed and the window was just a series of square carpet samples laid edge to edge.

Our third house was brand new; vinyl tiles downstairs and chipboard upstairs. We eventually put new carpets everywhere. Oh my, we felt like millionaires. Or maybe like 'normal' people.

Here, our fourth house, there were so many things that were a priority - re-wiring, replacing the dangerous central heating system, getting rid of the truly hideous living room carpet which was the same as the worn and dangerous stair carpet, replacing the rotten windows with double glazing, repairing the drive and so on and so on, that our bedroom carpet was very low on the list. Ah well. Cut and paste seems like an easy option now. 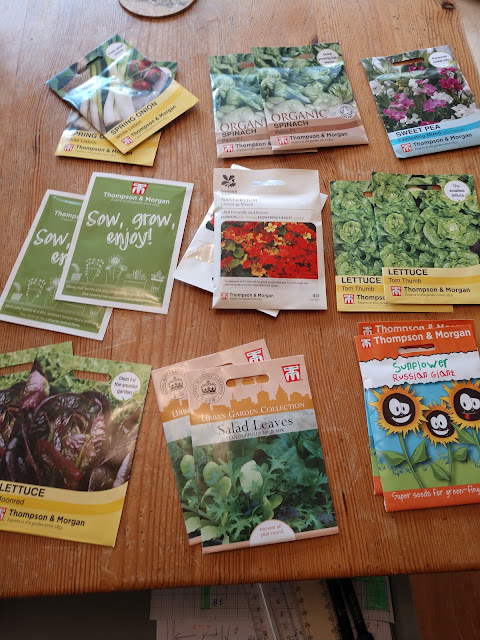 There has been a complete mix up with my vegetable and flower seeds order, with the result that I now have over 4000 seed to plant; I ordered red lettuce and green lettuce and cut and come again lettuce and spring onions and spinach and nasturtiums and sunflowers and savoury to plant next to broad beans to discourage aphids.

As you can see I received two packets of everything except the sweet peas, and no broad beans. Maybe I forgot to order the broad beans. And also a separate delivery of five strawberry plants.

I can see that my little vegetable patch consisting of about ten large containers is going to be insufficient for all these lettuces. I can't work out whether I have paid for ALL these packets, or half, and I don't think I can summon up the energy to delve through the paperwork. It would be quite fun to hand out lettuce seedlings to unsuspecting passers-by... 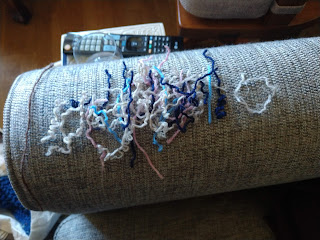 I have darned in another 80-ish ends today already - not even tea time - and yes, I did start counting them. There are about 35 left to go - yes, I did roughly count them. Then it will be time to Cut The Steek.
To be continued...