Terry Pratchett fans will get the reference, but as I am the only member of my family who hasn't read all the books several times over I have no idea how relevant the title is.

It's the old story of taking letters for a walk.

While is is so cold, I'm not going as far as the post box at the moment. In fact I'm not going out today at all. It is what people call 'window weather' (Thank you, Ang) - it looks lovely out there, bright, crisp and clear, sun and blue sky. But that wind must be coming straight from Siberia. As the old saying goes;

There were a couple of postcards and a small parcel to be posted on Wednesday; himself usually drops them in one one of the several post boxes he passes on his daily yomp around the local streets. But alas, he went without them, but very kindly, on his return, went straight out and posted them at the nearest box.

Thank you! I heard that the parcel arrived the next day!

Once again, on Thursday, there were a couple of letters waiting to be posted. Now here's the thing - Himself was so focussed on taking a photograph of a post box 'hat' that I hadn't seen

that alas, he forgot to take the letters out of his pocket. They weren't as urgent, and have gone this morning. That's how I know that the sunshine is beguiling and deceitful - he came back frozen.
The fattest letter contained a knitted wristlet, for the recipient to try on for size and  and also let me know if she would prefer a thinner wool. You will probably recognise the colours; it is the same as my socks and also the mittens. And also, back in 2019, a shawl which I later ripped out. There's still quite a lot left for the wristlet's partner in due course. If she would prefer something else, I will put the pair into the Christmas Shoebox Appeal. 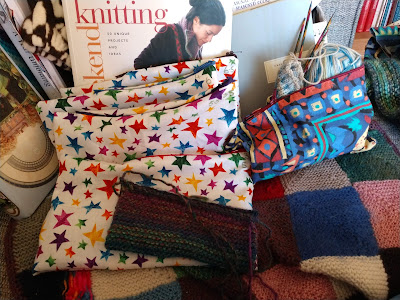 The picture isn't very clear, and I can't take another one now. The four zip-up bags in starry cotton have been under construction for a couple of weeks, and are now doing a fine job of corralling all my double-pointed and circular knitting needles. I spent some time hunting for a set of 3mm needles that I had lost, but last night I remembered where they ere; you can see two of them poking out of some blue-grey knitting half-in, half-out of a blue patterned bag. February's knitting project is a pair of Real Socks, but they will take longer than a month, at the rate of less than an inch per day.
I have fetched out a sewing kit that I abandoned last year, or was it the year before? 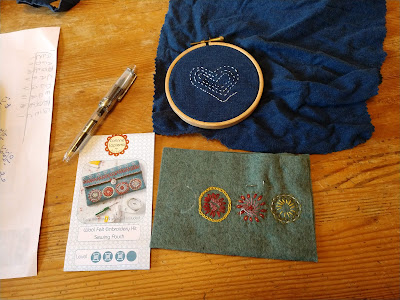 I became disheartened because the circles were so wonky, compared to the picture in the kit. I have decided to embrace the wonkiness, and after a trial bit of stitching (the heart) I set to work and completed the circles. 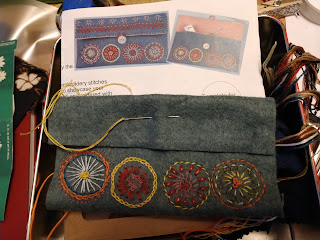 Next is some lines of decoration, and then assemble the whole thing into a little sewing pouch. I have ordered a pair of embroidery scissors and a 'vanishing pen', which, with a needle-threader, needle case, and a small ruler, will complete it nicely.
Yesterday I stood in the garden to do some sewing, in the bright sunshine, where there was almost no wind. I went out briefly this morning (which is why I know it is cold!) and was pleased to see several crocuses coming into flower, and the yellow petals on the miniature daffodils under the bottom hedge just beginning to show.
Posted by KirstenM at 15:39:00