I think I have come late to this particular party - this is bread that you make by stirring up flour, yeast, salt water into an unlikely looking mass, abandon it somewhere in the kitchen in that untidy state for six to eight hours, tip it out and persuade it into a reasonable shape; 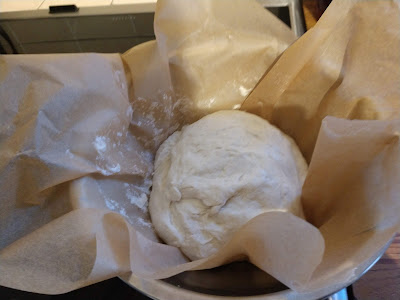 let it rest from its disturbance, and then bake inside a very large metal casserole, removing the lid at the last moment. The result is a sort of artisan effect loaf, with a moist, chewy texture. At least. that's what I took out of the oven; 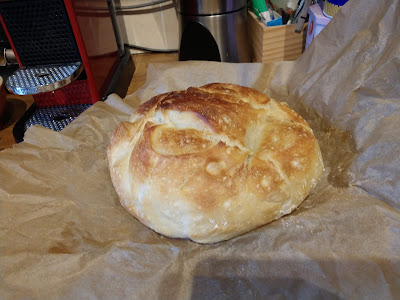 I didn't think to take a picture of the stirred up dough in the bowl before I put it in the fridge overnight - oh yes, that's where I had to leave mine, as time passed and it was too close to bedtime to do the equivalent of 'second rise and bake' stage. I have done this with conventional bread dough before; on that occasion I was rather alarmed to find that the dough had climbed part way out of the bowl and was making a bid for freedom. This time the dough had risen to the very top of the bowl but no further.

Here is a link to the recipe I followed (more or less).  It's American, so the measures are cups and the oven temperature is degrees F. I cooked it at about 210 C fan oven. An American cup is about 250ml; three cups of flour comes to a little over 400g, the size of an ordinary bread machine loaf..

Here are some useful pictures from a different site showing what the dough looks like in a slightly different version; 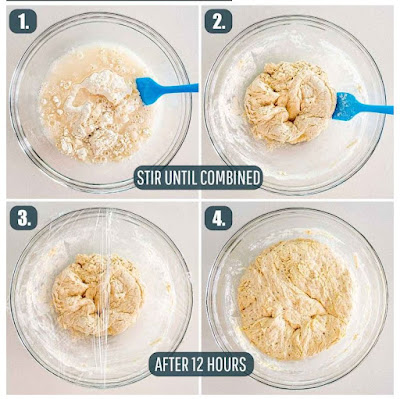 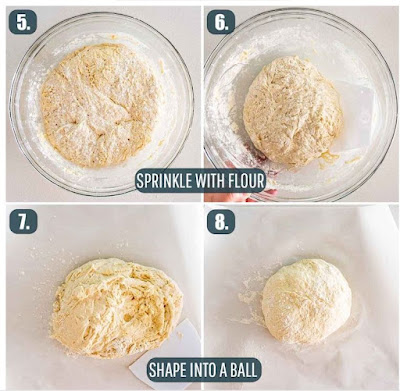 Looking at these pictures, I think I made the dough too wet at stage 2. I'll adjust the amount of water.
Searching onwards, I find that once can make 'no-knead' Hot Cross Buns. Now there's a thought.
I also made a yogurt pot cake the other day, possibly the first home-made cake since Christmas. I decided upon ginger this time, adding several chopped lumps of stem ginger in syrup and a serious shake of ground ginger, and using light brown sugar. The secret of making a cake last, is to cut the slices and bring them through on a plate, AND PUT THE TIN AWAY. Also, if you make your last mouthful or tea-and-cake or coffee-and-cake to be the tea or coffee, there is just the faintest chance that the cake might not be the lingering taste in your mouth....
Posted by KirstenM at 15:59:00