Saturday 5th November - Not at all cross with cross stitch...

My parcel arrived from 'The Works' yesterday; among other bits and pieces I had ordered this cross stitch kits; 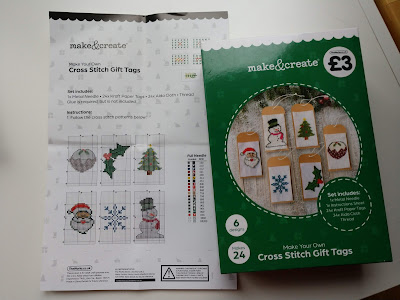 For three pounds you can't go wrong, can you? (Hollow laugh). Two dozen cut-to-size pieces of 14-count Aida fabric (I really do sound as though I know what I am talking about - but don't be fooled), little brown labels, threads, needles and complete instructions.

Everything is there, just as it says, but, the instructions are 'Follow the cross stitch patterns below'.

The patterns, and the diagrams at the top of the sheet (which measures slightly less than A5) are miniscule!

Technology to the rescue; after some technological wizardly (thank you, you know who you are!) the mini sheet was exploded to several times larger - you can see 'before' and 'after' in the picture below. 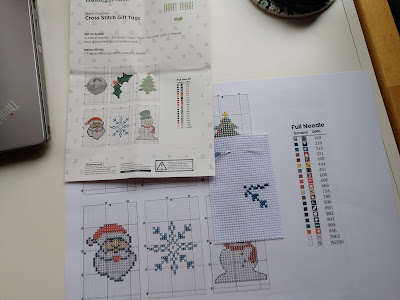 I thought I would start with the snowflake design, as it is all one colour, and looks very like a knitting chart to me. That's as far as I got this morning. I have chucked the needle - it was far too big and too blunt to go through the holes cleanly, and I'm using one with a bit of a point. Progress improved once I got my brain in gear and paid closer attention to the counting.

I thought this would make a nice little warm-up project before embarking upon the kit that Ang sent me in the last postcard swap. 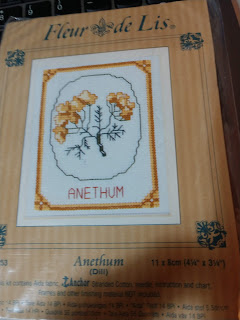 The last time I did any cross stitching was making a laundry bag from red-and-white quarter-inch checked gingham at the convent prep school I went to. We had an afternoon of needlework every week (groan). At first it was all relatively harmless tray cloths from Binka fabric and cotton perle. The laundry bag was a terrible shock; I remember it bag with loathing. We did all the main sewing by hand, using the gingham as a guide, and decorating it with a band of cross stitch, and then made a felt 'head and shoulders' with plaited wool hair and embroidered face to go in the neck of the bag. I can honestly say that blood, sweat and tears all played their part in the construction of this horror, which was only just completed in time to be hidden right at the back of the annual needlework display to parents at the end of term.

Was that the year we had to knit a dishcloth as well?

My heart goes out to poor Sister Patricia (may she rest in peace, after all this was nearly sixty years ago so I would guess she would be over 100 by now) who had the thankless task of teaching me.

Now look at me - sewing and embroidering and knitting with enjoyment, for relaxation and for pleasure! Oh Sister, what would you say if you could see me now?

Sometimes I wonder about the people in the factories assembling these kits and packages, measuring out the different coloured threads and winding them into hanks, picking out a needle and sealing it into a little cellophane packet... How on earth can it be economically viable to make up these kits and sell them on the other side of the world for so little money? Am I complicit in exploitation, or providing them with a source of income?