It appears that we currently have 4 artificial Christmas trees in the house. If I think really hard I think I can account for them all, although initially I did wonder what weirdness had been going on in the attic all year.

This is the 6ft pre-lit tree that we bought a number of years ago. Last year I found it was becoming very tiring to decorate it. I took most of the month (this picture was taken on 2nd Dec last year) and I resorted to decorating thexside facing me, cautiously turning the whole tree round, and doing the other side a few days later. 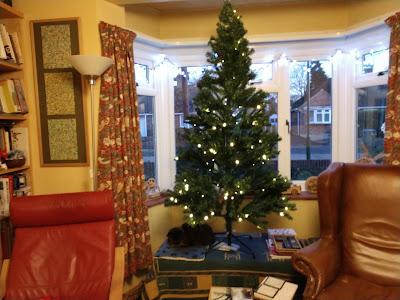 So, in the interests of downsizing, we bought a 4ft replacement,  considerably smaller but much easier to decorate. Here it is at about the same stage as the tree above; 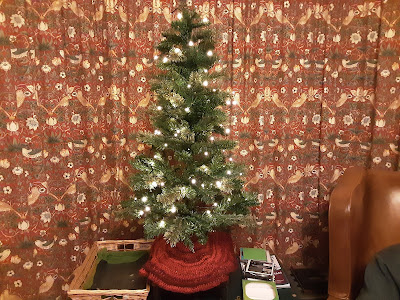 However we discovered two more 5ft trees in the loft! I've already offered the pre-lit one on the church email group and it will be collected tomorrow.
I can account for one of the 5ft trees; for a couple of years the pre-lit tree and its powerpack were separated after one Christmas, so we bought another tree. But how did that other tree get there?
Anyway, I shall send round another email tomorrow,  and if there are no takers then I'm sure a charity shop will accept them.
Posted by KirstenM at 21:14:00