Sunday 10th June - Invisibility - everyone can be a genius

I am indebted to victhevicar's latests post for this; http://victhevicar.blogspot.co.uk/2012/06/king-has-no-clothes.html about the current exhibition at the Hayward Gallery http://haywardgallery.southbankcentre.co.uk/2012/06/08/the-unseen-andy/

which has been reviewed here;
http://www.guardian.co.uk/artanddesign/2012/may/18/hayward-gallery-invisible-show

It appears that the exhibits include a piece of paper that the artists has stared at, a film shot with an empty camera, a plinth that someone once stood on. Can you buy your ticket with money that you used to have?

The trouble with what I think of as "concept art" (bear in mind I am not a trained Art Historian so am probably using all the wrong jargon) is that while the concept is interesting, and discussion of the concept can be interesting, the actuality is not.

It gives me hope, though, that I can join in the local Art Trail, starting next weekend as an artist, rather than as a spectator. http://www.openhouseart.co.uk/art-trail/horsham-open-studios It will be very easy for me to knock up some invisible artworks; in the hall, I will have "The wall where the mirror used to be".

Here is a preview;

The sitting room is an ideal place for an installation, made entirely of air, entitled "Watching the Jubilee on Television". A couple of dents in the cushions of the settee and chairs should do that. If I can clear the dining room table in time (tricky one, that)
http://a-letter-from-home.blogspot.co.uk/2012/05/sunday-27th-may-not-again.html 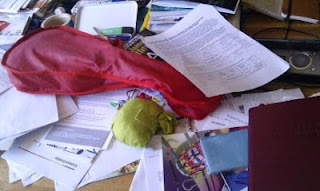 I will have another installation consisting of the empty wooden table surface - ironically titled "Hive of Activity". The kitchen can be left as it is, titled "Place of Devastation - a concatenation of themes and associated consequences of superstore, local market and back garden sources affect the way in which food is acquired, prepared and consumed, and the resultant debris, and the ways in which packaging and other wastes are sorted and disposed of according to the nature of the substances and the provision of receptacles for each" - or some such stuff and codswallop.

I'm not sure about upstairs. Maybe I'll let them up to the bathroom and lavatory, equip them with a wallpaper scraper and invite them to make their own individual contribution to the gradual erosion of the old wallpaper, a process that has been on-going for nearly a decade.

I wonder if we can get away this idea in schools? How easy it would be. The Inspector calls, and we show him boxes and boxes of invisible evidence of the children's efforts at the "The Rs" - Literacy, Numeracy and Mark-Making. The emptier the box, the blanker the paper, the greater progress of the children. When they can finally produce a completely unmarked, pristine workbook for every subject at the end of the year, we will know that we have achieved the top level possible.

I think I will choose John Cage's 4'33'' as the own choice set piece for my music candidates next year. It's a no brainer, however you look at it.

Email ThisBlogThis!Share to TwitterShare to FacebookShare to Pinterest
Labels: art