Hay-on-Wye - Even further back in time

We arrived in Hay-on-Wye on the Friday afternoon, after a torrid journey through tedious holiday traffic (what else can you expect in August!) Having made careful enquiries about whether it was possible to turn up before the official time of 4pm, we were delayed and finally unfolded ourselves out of the car at 5pm.

Saturday was taken up by a round trip to Birmingham airport, to collect the fifth member of our party who was flying in from elsewhere. On the way back we stopped at Leigh Park Barn -

Right, where were we.

Sunday was a non-car day. Thank heavens. We spent the morning pottering around the town and  I bought a couple of postcards to make sure of sending them off before we finished the holiday. One with a picture similar to this caught my eye: 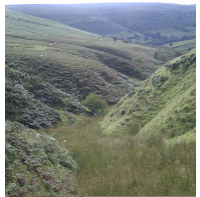 It is a dry valley in the Gospel Pass, the highest paved road in Wales, a very old way through the Brecon beacons from Hay-on-Wye to Abergavenny.


Joy of joys, there was even a stone circle at the top.


The kind with little stones like this one in a rough circle. 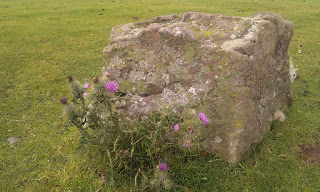 It seemed to be a friendly little circle, more "domestic" than awesome. It felt quite - approachable, understandable. When I was younger, I remember visiting Stonehenge when you could still get upclose and personal - and a little scared - by the size of the whole thing. 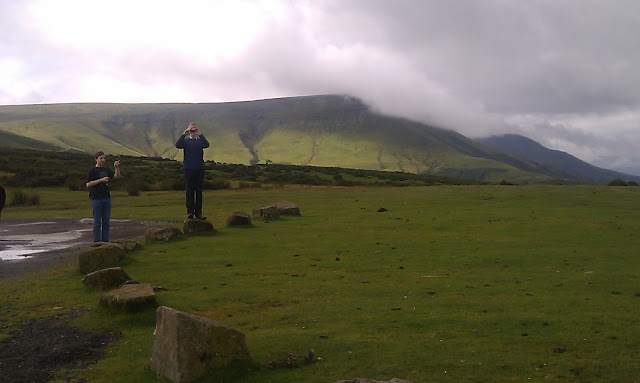 The views were breathtaking. (So was the wind). 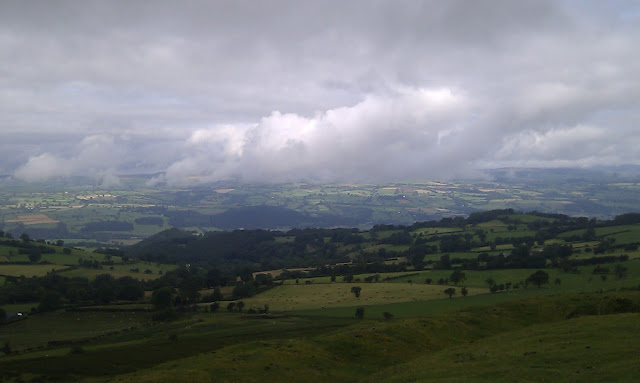 I took the picture of the dry valley a little further on, before the long descent through increasingly civilised farmland down to Abergavenny (and the long, long wait until they could manoeuvre the broken-down tractorish kind of thing that was blocking the single-track road into a gateway to let us pass. "I spy, with my little eye, something beginning with... G". "Grass" "Yes, your turn"....)
Posted by KirstenM at 17:21:00