I have annoyed the cat by making a cup of tea using my Philips coffee maker (It makes tea as well). She has huffed off my lap and curled up at the end of the bed, 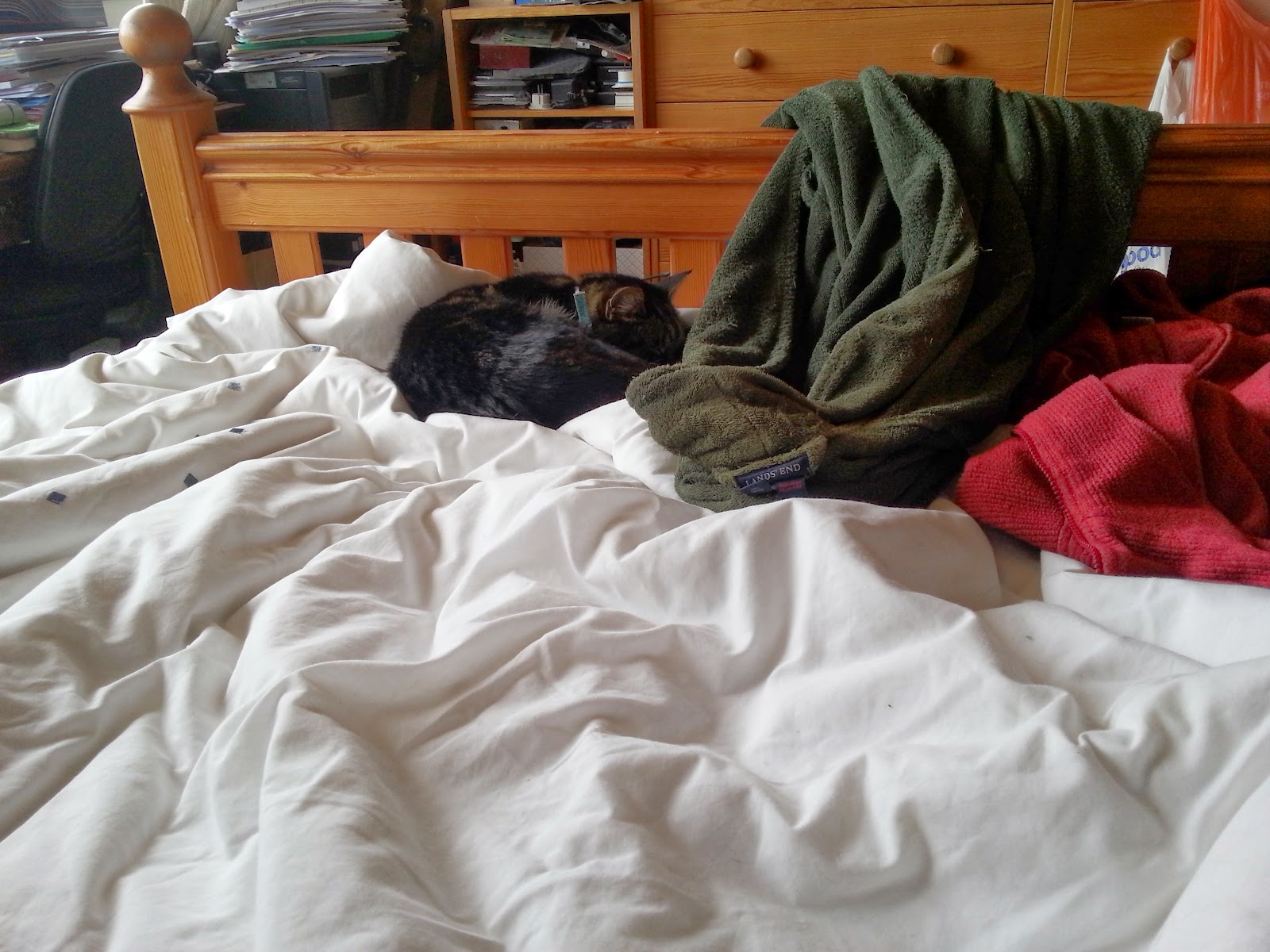 and I can continue writing up our London Adventures of last Sunday.

After the service in Westminster Abbey, we emerged into a blistering cold wind and mooched around Parliament Square. The Clock kindly stood still for photographs, and then Big Ben obligingly struck 12 - the sonorous chimes echoing over the squalling gulls and squawking sight-seers.

Round the corner, along towards St James' Park, looking bright and welcoming in the crisp light, hosts of nodding daffodils brightening up the scene, and there was a discrete doorway to the underground Churchill War Rooms Museum.
Their website recommended allowing 90 minutes for a visit - we stayed considerably longer and still missed things.

What struck me was what a Great Character Churchill was. His story can be read elsewhere, but to fight through three major wars, working up to 18 hours a day in World War 2, to write Nobel Prize winning book, to paint very decent oil paintings, and to earn so much money through writing (although it did mention that American friends bailed him out of one personal financial crisis) - when I look at current recent Prime Ministers they appear pale shadows of the sort of person he was. And the conditions his staff worked in, underground in stuffy, insanitary, gloomy, cramped and uncongenial underground bunkers.There was a board displaying the weather up above - Sunny, Raining, or, if a bombing raid was in progress, Windy. Sometimes the staff would stay below ground for days, sleeping in very basic accommodation in an even lower underground level.
Panorama of Horse Guards Parade, Old Admiralty Building, Household Cavalry Museum, Scotland Office and St. James's Park and the Guards Memorial, from wikipedia

After all that it was late, and past lunch time. We walked along the edge of the park, across the Horse Guards Parade Ground and through the arch to Whitehall. There was a long-suffering young soldier under the arch, with sword held truly vertical, managing to maintain his composure as people took pictures of their friends standing beside him. Through the next courtyard, and - we couldn't have timed it better - they were about to change the two mounted soldiers who had been stationed in their "sentry-stables". A shout, and two huge brown horses came clopping out of a gateway, straight at the rows of tourists who were milling about in the way. They scattered hither and thither, squeaking like mice, while the soldiers and their chargers proceeded without hesitation to their positions. A couple more shouts and a bit of stamping about from the sergeant in charge, and the changeover was completed.

Our Americans had fish-and-chips - one decided to brave the mushy peas, the other stuck with "garden" peas. We had bangers-and-mash (we'd had fish and chips the previous night!)

It was quite a challenge, trying to answer questions about the historical setting of everything we had seen. My history knowledge has huge gaps, as I gave up history in school shortly after Queen Elizabeth, and rejoined it when I changed schools to find myself with Gladstone and Disraeli. Anything in between has been gleaned from reading fiction; Georgette Heyer (snippets about the wars with France, and Jane Austen (who appears to have been fairly oblivious to world events), Sharpe stories and C S Forester "Hornblower" books, and also programme notes in classical music concerts (Handel's Water Music - the Hanoverian succession? 1812 Overture, something to do with a battle?)

Email ThisBlogThis!Share to TwitterShare to FacebookShare to Pinterest
Labels: London