Today's tea was "Assam with Nutty Chocolate". I wasn't feeling brave enough to try it today, so I've saved it for tomorrow.

To be honest, or more to the point, uneconomical with the truth, I'm a bit cream-crackered after the past three weeks, which is when we heard that arrangements were to be made to transfer my mother from hospital to a Nursing Home rather than back home. I think the last few electrons were drained from my batteries by a couple of school concerts on Friday and Saturday morning.

So today was supposed to be a duvet day at home - no work scheduled apart from a couple of piano lessons this evening.

I stuck it on the settee until the afternoon, and then got bitten by the Christmas Bug.

BB started on putting up the lights around the sitting room, but hit the first snag early on:

This is what has been hiding behind the television since last Christmas; it took an hour to untangle, identify and label (thanks, Canadian friends) all the cables in the hope of working out which ones could be safely unplugged. Answer; none of them.

The cat took refuge in her personal bomb shelter.﻿ 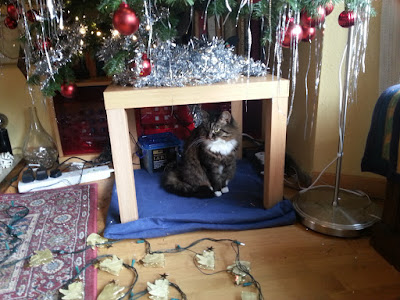 Until we got the vacuum cleaner out, at which point she felt compelled to leave the room.

The angels that you see spread out on the floor are a real pain to untangle, all sharp angles and corners, but we love them because they remind us of Bath Abbey 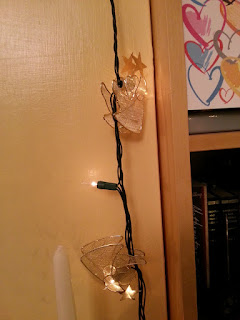 Eventually we got all the lights up and I have to say I am highly satisfied with the result. 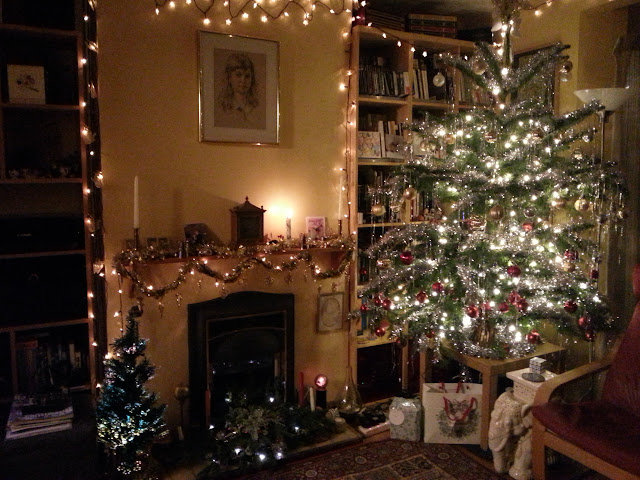 Very tasteful, no? I am much cheered. Although the cat was dissatisfied until I moved the Christmas carrier bag which was blocking the entrance to her bomb shelter. Of course, once she had made her point, she settled on the stool instead. Because she is a cat. (The bear is much less trouble) 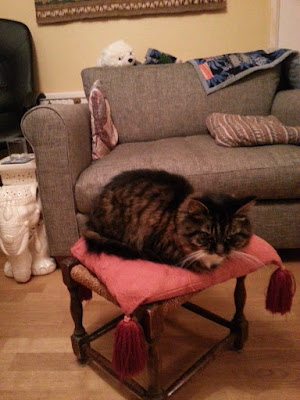 Now for the dining room. No, a better idea. More chocolate and then Bed. Zzzzzz