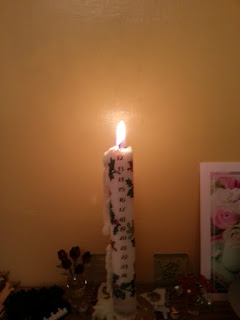 Two visits today - this morning the men (my husband, my father) went. The pictures for the 60th Wedding Anniversary have arrived (thank you!) and were transferred to a USB memory stick as we had discovered that the TV in my mother's room has a USB port. Success - they were able to bring the pictures up on the TV screen, which provided plenty of discussion and entertainment.
I went this afternoon with my husband, loaded with bouillon powder and apple sauce as requested. She was asleep when we got there, so I went and showed my shopping to a nurse, and asked whether it was possible to see if my mother would like them. She obligingly stopped what she was in the middle of doing and went off to make up some bouillon.
While I was out of the room, she asked my husband if she could see the photographs of the Anniversary Party again. Ah. We'd handed them over to my father. In future I think we will keep a copy with us so that we can always show them, and maybe other photographs, at any time.
The bouillon was nearly a success; it was a little too strong. However it disguises the taste of the thickening agent pretty well, and I think next time round should be better. The apple sauce was rejected after one taste "too sweet". I've discovered that what she really craves is fresh fruit, mashed to a pulp. I think they are going to see if mashed banana will be acceptable this evening. It's a case of trying to work out what she would like to eat; as she eats so little, every teaspoonful is important.
"what I really want now is to go back to sleep. And not be woken up by people" this last with a wicked grin at me, because we had woken her from her sleep. So we made our goodbyes.
I had this going round and round in my head all the way home:
What shall we do about poor little Tigger?
If he never eats nothing, he'll never get bigger.
He doesn't like honey and haycorns and thistles
Because of the taste and because of the bristles.
And all the good things which an animal likes
Have the wrong sort of swallow or too many spikes.
But whatever his weight in pounds, shillings, and ounces,
He always seems bigger because  of his bounces.
'And that's the whole poem,' he said. 'Do you like it, Piglet?'
'All except the shillings,' said Piglet. 'I don't think they ought to be there.' '
They wanted to come in after the pounds,' explained Pooh, 'so I let them. It is the best way to write poetry, letting things come.'
'Oh, I didn't know,' said Piglet.
Here's the whole story.... with JUDI DENCH!!!!!!!
https://www.youtube.com/watch?v=gwbRpce3TnQ﻿
﻿