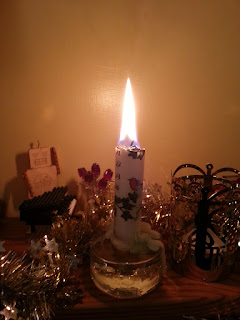 I lit the candle for about 30 seconds this evening, because I let it burn for too long (again!) yesterday.

My father went on his own to visit my mother today (that sounds so clunky - but I stand by my principles of trying to avoid breaking anonymity in an open blog post.) He sys they had a pleasant time together, talking about a trip to Vienna at Christmas-time a few years ago, and other things.

It is strange to look back over the events of the past few weeks. My mother went from "having a bad cold" on 11th November, to emergency admission to hospital a few days later, to "serious conversations about probable outcomes" all in a week. Then suddenly, she seemed to improve, just before and during the weekend of their 60th Wedding Anniversary. But it was only a day or so later that we were faced with the "seriously serious" conversation regarding End of Life care, possibly only a few days, maybe a week or so, to live. This was all before the end of November.

Now it is nearly a month later, and she is in a much better state than she was, health-wise, at the hospital, and our state of urgency and emotional charge is much reduced.

She still doesn't eat enough, and there is the ever-present problem of not being able to swallow properly. So, it's still "one day at a time", but the days are less anxious and stressed than before, for all of us.
Posted by KirstenM at 22:06:00