Yup, last night there was an official-sounding ring at the door.We opened it to find a huge fire engine parked outside, and several fully-suited fire-fighters asking if they could go through our garden to get to a large and apparently out-of-control fire on the public land behind our house.

Sure, we said, a little uncertainly. WE haven't managed to get through the laurel hedge beyond our gate for maybe a decade, but maybe they would succeed where we hadn't tried.

No pictures - sorry - it was after dark.

Anyway, the conflagration turned out to be a substantial bonfire in the back garden of one of the substantial houses just the other side of what we call "the river" (actually a mild and inoffensive and barely-flowing stream, until the flood-prevention sluices are opened, when it turns into a broad, fast-flowing and dangerous river).

This afternoon I went down to have a proper lok at the laurel hedge. 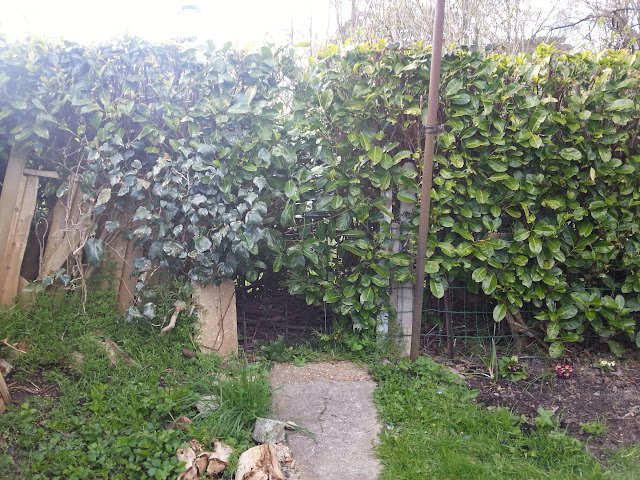 You have to admire their determination and strength of character to venture into this lot in the dark. Especially when you consider that the ground plunges down a six-foot bank (which is why we are unconcerned when "the river" becomes a sudden twenty-foot wide spate) 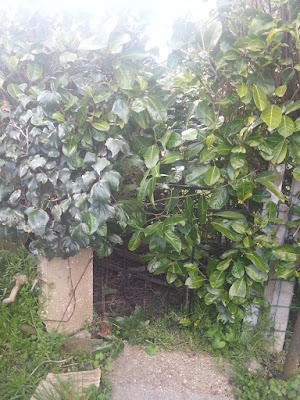 We have been meaning to re-instate the access to the common land and footpaths for some while. At least we now know it is possible to get down the bank, and, back up it again.
Posted by KirstenM at 19:29:00

Email ThisBlogThis!Share to TwitterShare to FacebookShare to Pinterest
Labels: surprises