Having had a nearly Saturday yesterday, it feels like a three day weekend.

And then it was go go go. We moved the cookery books that were ready to go to the charity shop to an upstairs bedroom (there's a surprise waiting for someone when they come and stay) as a friend would like to go through them first.

More on the garden, including moving a couple of sun-roses from their tubs into the newly-dug front garden:

They were looking increasingly unhappy in their tubs, and I hope they will like their new home better. I've also replanted about a third of all the bulbs we've been digging up - no idea whether they are crocus, large daffodil, narcisus, hyacinth or miniature iris. Might even be a tulip or two. Spring will be a series of surprises. Unless they sulk and don't come up. Tomorrow may well include a trip to the garden centre to find something to fill the empty tubs. 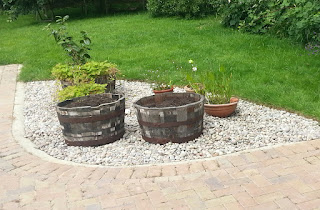 All that effort required cake. I made some last night - just the good ol' yogurt cake recipe, with chunks of defrosted apple sliced dropped on top before they it went into the oven. I haven't even bothered to extract it from the tin, as it's not gong to last long with all this digging going on.

We've another unhappy shrub to move to the front once we've made a proper space for it.


Lunch - breathe, relax, and round to my father's flat. We've moved some furniture round, and clothes from one wardrobe to another, and created some space in a bookshelf and just generally moved the reorganisation project, to make a study from the small bedroom and move his stuff into the large bedroom, along a few steps. Here's hoping he will manage a good night's sleep, now that we've moved the bed; I forgot that the study-bedroom has a blackout blind, and the other one does not...