Except it's Friday, as I now realise. I've known it was Friday for most of the day, but every so often it sort of changes in my mind.

The morning started with emergency piano accompaniment practice for a saxophone exam that I was accompanying at 10, and for my harpsichord lesson at 11:30. The saxophone exam went OK - for me, and, as far as I can tell, for the candidate. The harpsichord lesson was going to be distinctly hard graft - more practice would have made all my pieces a lot easier to manage.

However, for some reason, he didn't turn up. I stood outside the locked music school listening to birdsong, smelling the lime-blossom,

looking at the various statues on the nearby buildings, 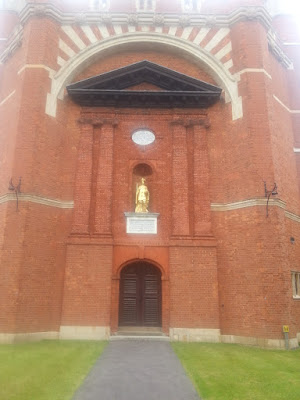 watching the swallows flitting between avenue of trees, and just enjoyed half an hour's peace, before slowly wandering back across the nearly deserted campus (minutes earlier, hordes of teenagers all chatting in French/Italian/Spanish had been scurrying hither and thither, but they disappeared into various buildings and silence happened again).

Home for lunch. While it settled, we filled the bags for a charity shop run tomorrow.

Then then we "went at" the front garden. These pictures, going from right to left, show the unimproved state, the work in in progress stage, and what we are hoping to achieve right across the front.

This patch was strimmed a while ago, and then... nothing happened except rain and busyness.

Moving along, we've had to dig out huge knots and mats of couch grass. The roots go under and in-between Everything.

Here's the end where we have just about finished. This fuschia has been steadily shrinking over the years - unsurprising when we removed nearly half a bucket full of bulbs from among its roots (and yards of couch grass). We've given it some "gro-more" and a bucket of water - hope it thinks that it is a treat.

I also worked my way down the border between us and next-door. They have covered their flower beds in gravel, and we intend to follow their example in due course. I discovered that the slugs all live under that wooden edging strip. Or did. I have rehomed in them into the garden waste bin.

After that, a cup of tea was in order; but when I came to chuck the teabags somewhere, kitchen compost bin was full,

so I went to empty it into the wormery. An impenetrable forest of roses, goose-grass and other vegetation sprawled nonchelently across the whole area.

All done.No, hang on a minute, it's Friday, not Saturday. A young lad is due in fifteen minutes for a theory lesson, and the table looks like this..

Byee - work to do!
(PS It's a balafon, in case you were wondering)