So, what has been happening since the last letter?

The trip to the Netherlands for later in the year has been sort of sorted out. Dates, flights and hotels are all organised. I am now waiting for my GP to complete a form certifying that I am "fit to fly", and I have reserved an oxygen supply for the flights. Travel arrangements while we are there are a bit vague, no, let's be clear, they are totally unknown. We could get a train and a bus and a taxi, or maybe someone will give us a lift, or maybe... Who knows!

I'm in a knitting mood at the moment. I spent months trying to find a jumper in a style and colourway that I liked, and ended up buying this yarn (I can't call it wool because it is acrylic);

It has several things in its favour; someone I know who is a Serious Knitter is using it to make herself a cardigan, it is cheap, it uses big needles and few stitches, and it is knitting itself into a sort of stripy pattern, which usefully disguises any uneveness in my knitting. Most of my jumpers are reddish or wine-ish or orange and I wanted something blue-green for a change. 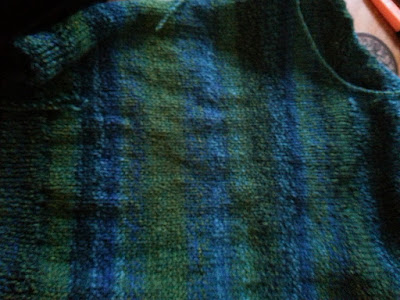 I've also finished knitting a cushion cover in a wool which is designed to look like fair-isle when you knit it up. I've used it before in a slightly different colourway. 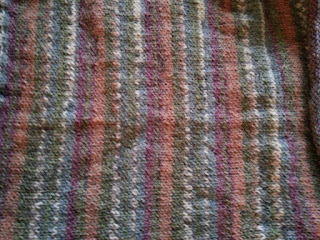 I'm just waiting now for that moment when inclination, a a few hours spare time, and daylight coincide in order to sew it up.

This may very well be the Year of the Knitting Needles. It also needs to be the Year of Finishing Off as there are various "WIP"s (Works in Progress - the bane of all knitters) waiting for finishing touches.

The other day I was at the hospital for lung function tests and clinic appointment. The results are slightly down, but consistent with being withing 10%, and also I do tend to score lower in the winter compared to the Summer. I saw a new consultant, who, having gone through me notes, was clearly set to "amber" and moving towards "red", as in Something Needing To Be Done, but after discussing things and checking things, moved back towards "amber but probably green" as in "Keep an Eye on things, but nothing needs doing now". Good. Back in six months - August - and hopefully the results will be better.

It was a fairly dank and miserable day, and the clinic was running very late for some reason, so once we escaped the clutches of the medical world we scrapped our plans for the V and A or any other excitement, and just meandered home, looking in at Peter Jones to buy urgently needed knitting supplies.  But not wool. Or needles. Not on this occasion.

I'm trying to implement a sort of rule that something gets finished before another thing gets started. Cushion covers and jumpers excepted.

Well, I'm all the bettter now for a cup of coffee after a day of teaching - Chinese New Year (again).

I found a box of small nylon squares, in neon colours, so dished them out to the little children to pretend to be dragons and use as wings to fly around the classroom. In various guises ("just the pink dragons", "only dragons wearing green jumpers" and so on) this activity lasted pretty much the whole time and everyone (including me, which is the MOST important aspect of any teaching that I do) had a good time.

.Oh wait, that's a picture of a lion.

"Find a job you love, and you need never work again" so they say. (But probably not Confucius). I'm just about to teach two more piano lessons and then "work" will be done for the day.