It won't last, you know, this daily list thing. You and I will both get tired of it sooner rather than later, I suspect. The idea is you make the list when you first wake up.

Today, I woke abruptly from a rather unpleasant dream where my car was just about to get buried in a mudslide and I had climbed out of the window and was balanced on the roof shouting at the men driving mega-earth-moving-machines to get them to stop. And also to try and work out how to get rescued. I'm not sure how I was rescued; I think I had to climb into the slippery bucket of the huge digger that had been dropping mud by my car, as bringing in a helicopter risked me getting blown off the roof. By then I was properly awake, and ready to go back to sleep again.

Seeing as it was also about 5 in the morning, list-making was not going to happen at that moment. However, later on that day we went out to lunch (at the Black Rabbit in Arundel). We only had two courses - no room for pudding and anyway we have a carton of posh custard and a bag of  bananas to use up tonight. Sitting outside, next to the river, looking out over the meadows across to the downs (me) or towards the castle (him), today's topic chose itself.

1."The Wind in the Willows" which I have just finised reading. The River flows through the story. I've just started "The Willows in Winter" - a sequel written by William Horwood, and the River plays a leading role in that one too.

2.Looking for miniature water creatures in the River Misbourne, in Chalfont St Peter, with a sampling kit I got from some educational scheme for testing river water purity, when I was about 10. Test-tubes, and a hand lens, and an identification chart. Hot, and wet, and muddy, and not as exciting as it looked on the packet.

3.Long summer afternoons sitting on the banks of the little muddy stream at the back of our house. The children catching little fish - I've no idea what - and keeping them in plastic tubs until it was time to back. I had a rug to sit on, a flask of coffee and my book.

5.The River Ouse at York, creeping up the embankment, over the pavement, across the road and into the pubs. Our house was higher up the hill, fortunately.

6.The Aire in Leeds, black and treacly as it slowly slipped past where we were sitting in the gardens of Kirkstall Abbey, Leeds, one Summer afternoon back in the 1970s. Slow bubbles, methane, probably, certainly not fish, rose to the surface. Pollution was a real issue back then - we didn't settle as there was a definite smell...

7.The river running through the centre of Boughton-on-the-Water, and a duck-race (hundreds of little numbered yellow plastic ducks tipped into the water - if yours crossed the finished line first, you won a prize). Apparently the races have been abandoned. It's a long and complicated story (and we were not involved, promise.

8.The river in the book "On The Banks Of Plum Creek" which called to Laura (Ingalls Wilder), and nearly drowned
her. I've always remembered the picture; 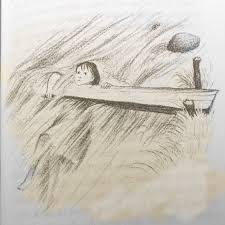 Luckily she managed to pull herself out of the water and run home.

9. A boat holiday on the River Thames, many, many years ago. The foolish look on the dog's face when he fell in, and the terrible smell of wet dog when we drove home in the car.

10.And, of course, this, just downstream from the Niagara Falls. 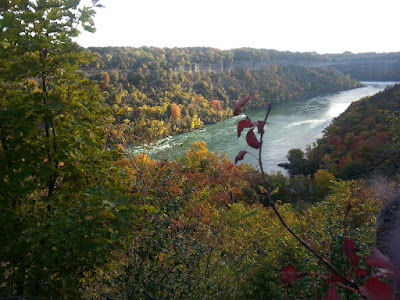