This is orange and chocolate shortbread from the Jamie Oliver "Take 5 Ingredients" cookbook. 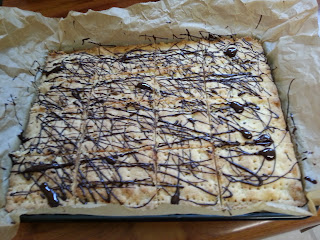 It looks pretty much like the picture in the book.

Appearances can be deceptive...

This travelled through many byways before reaching eating point. It all started because I wanted to make Nutella biscuits, which a pupil gave me after their lesson last week. We've got as far as buying the Nutella, but the eggs in the fridge would probably have hatched by now if they hadn't been chilled, so had to be chucked. So, shortbread it had to be. But, for various reasons, measuring out the ingredients didn't go exactly as planned.

So, at one point I added a little more flour because it was so sticky. Then I added some orange juice as well as the zest because it was too dry. But, in order to stop it turning into pastry, I added a few drops of olive oil...  Maybe I should had balanced it out with a bit of sugar? It tastes OK... I made some before which was pronounced too crumbly. Maybe third time lucky?

Next task is to buy eggs before I eat all the Nutella.