Wish we had gone out.

In between the cloudy moments I did some minor gardening. A few years ago we had really successful pots of flowers outside the front door; 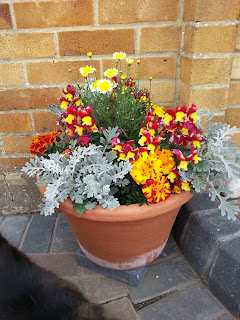 which included snapdragons and nemesia. And that silvery stuff which I have to keep looking up its name.

One snap dragon plant remains - it has self-seeded under the gas meter and has made a determined appearance each year. The nemesia also self-seeded and for two years made a cheerful clump in a gap in the driveway near the front door. 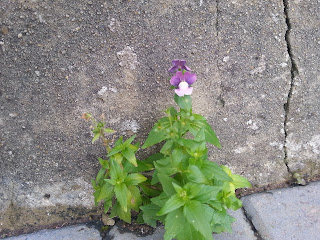 This year there were little nemesia plants along the edge of the front grass, in the paving on the other side of the door, and even in the back garden. I gathered all the little shoots and shoved them in a couple of planters, hoping that I got enough of the roots; 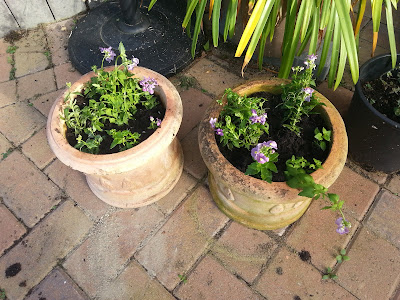 I've picked some more brussel sprouts; just one meal left before the stalks go into the compost bin. 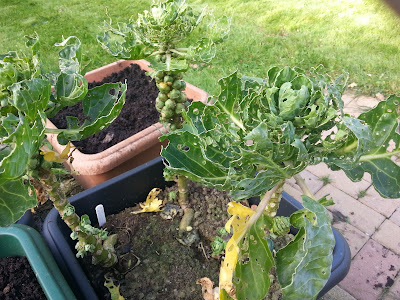 The vegetable growing experiment has been quite successful, in that I have enjoyed doing it, and it was partially productive. Next year - yes, there will be a next year! - will start with broad beans, which I find can be sown in winter. The directions said to protect the young seedlings. These are only seeds at the moment. 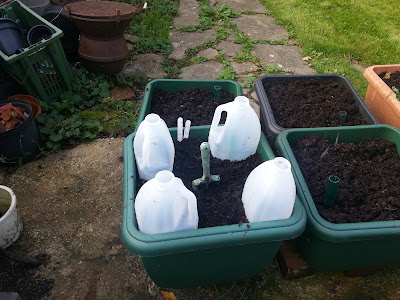 The plan is to sow some more in November.

I had a great tub of waterlogged soil excavated from the compost bin some months ago. (Unfortunately the tub doesn't have drainage holes, and the cover \i put on wasn't properly rainproof.) I used up a fair amount in repotting last year's outdoor Christmas Tree, ready to decorate in due course. I think I prefer the more subdued effect of the dirty black pot to the garish shiny red one it came in. 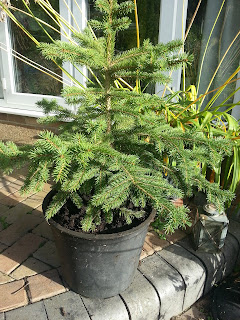 It is half past three in GMT, as opposed to half past four in yesterday's BST. Time for a little smackerel of something... I wonder if we have any honey?

This time tomorrow I should have taught two adults and three children, and be having a quick cup of coffee before the after-school pupils arrive.
Posted by KirstenM at 15:37:00