OH NO! I never posted this! It somehow got left as a draft! But I did honestly write it on time...

If I'd thought about it in time, I could have used one of my favourite words yesterday;

I was idly reading a few pages of "The Etymologian" by Mark Forsyth last night before "lights out". It is a sort of "dip-in-and-out" book which is perfect for when I am too tired for anything complicated. 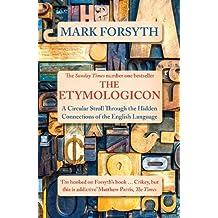 I hadn't "dipped in" to it for ages. The page that appeared when I opened the book (I have a kindle edition) was all about words invented by John Milton.


I've copied and pasted this list of examples from a Huffington Post article here  as I haven't got my kindle to hand.


pandemonium: Used today to refer to a state of utter chaos and uproar, Milton created this term, which roughly translates to “all demons,” to name the capital of hell in his epic Paradise Lost.
lovelorn: Forsaken by one’s lover. Milton used it to describe a nightingale in his work Comus.
unoriginal: Even the word unoriginal was once original; Milton was the first to use it. It appears in Paradise Lost in the line “unoriginal Night and Chaos wild,” and has been interpreted there to mean both its current meaning and primeval, without origin.
earthshaking: Used as an epithet for the god Neptune in Comus, it typically means extremely momentous.
space: Milton is believed to be the first to have used this word to refer to “outer space,” paving the way for space travel, space probes, "2001: A Space Odyssey" and more.
enjoyable: We use this word to describe pleasant experiences all the time, thanks to Milton.
fragrance: A scent, usually a pleasant one.
debauchery: This refers to sensual overindulgence or hedonism.
terrific: We now use terrific to mean great or awesome, but Milton originally used it to mean something much more like terrifying, in describing the creation of snakes in Paradise Lost -- it was derived from the same Latin root.
goosery: Alas, this one hasn't become commonly used. Milton used it to mean silliness (befitting a goose). In his pamphlet "Apology for Smectymnuus," he critiqued "finicall goosery of your neat Sermon-actor."
This is just a very short selection from the hundreds of words Milton constructed - what surprised me is how "modern" and "everyday" they are, unlike words like "antepenultimate" which seem purposefully constructed to confuse, even though they are absolutely precise in their meaning.