It doesn't take long to lose track of date and time without the daily schedule of here, there and everywhere.

I think it is probably Friday, and Wednesday last week was Valentine's Day (and Ash Wednesday) so work it out from there.

I'm still staying in bed; another time I might have got up and gone to work, but luckily I have been prevented from such and excess of Protestant Work Ethic by being signed off. So I am being resolute, and giving the antibiotics every chance. I can measure my progress by Sudoku levels. Yesterday I was only fit for "Mild" and "Medium". Today I have managed several "Tricky" puzzles. I haven't attempted "Extreme" or "Deadly" this week.

I've drunk a few more cups of tea, but this item on the BBC news about the perils of too much is a little alarming. Apparently it's the lemon or fruit ones that do the most damage, so I've only had "detox"; no lemon, no fruit, and not much taste, to tell the truth. Maybe that's why it is called a "clean" infusion.

Much better than a "dirty" infusion.

What else? Someone on twitter mentioned the book "Ballet Shoes", as in she was having such an irritating day that she was going to sit in the sun and read a few chapters. 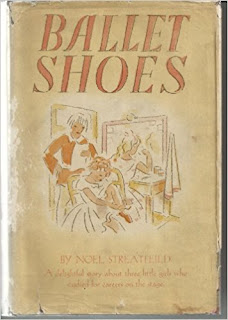 I couldn't find my copy. It was an old secondhand one and probably disintegrated; no matter; a few clicks and I was reading it on my kindle. Then I was distracted into watching it on youtube. Oh, the joy of watching films in bed on my laptop. It took me back to having measles as a child, spending the days in my parents' bed watching their ancient and unreliable television.

There are two versions of the film; I've watched both, and read the book. It is interesting to compare the book and the two screenplays. On the whole, the book still wins. I prefer the more subdued dramatic levels in the original story to either of the screen versions. I blame "Eastenders" and the need for every life to be constantly over-full of events and drama every moment of every day

The battery level on this laptop is sinking after all this use; now down to 19%. And it is about 5pm. BB (recovering apace, thankfully, from his op ten days ago) is now able to driven and forage for supplies, and cook them. At the beginning of the week that was still down to me (and probably the tipping point for this current situation, thinking about it).

I shall go and see how he's getting on; and press "publish" before this contraption powers itself down.