This isn't such a successful 10-line (yes, I only lifted the stylus from the tablet 10 times) drawing, but hey - here it is anyway. 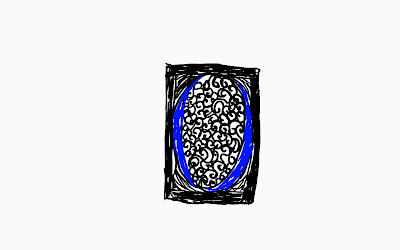 And here is why I did an illuminated 'O';

I've vaguely following an on-line writing course, and today's task was
'select one of the objects from the list of "things found in the protagonist's pocket" and write for 10 minutes'

The list was one of several lists that I've created last week.

'A thin notebook, roughly the size of a small matchbook, every page filled with miniscule writing in code'

Here's what I wrote;

Julie sat at the professor's desk looking at the notebook lying in the palm of her hand. All that effort, and now, for what? There were only three days left. She had thought that finding the book would be the solution, but all she had was yet another problem.

The tiny angular markings filling each page looked as clear and distinct as when they had been written. There they were, marching across the the pages in a dense pattern of rows and columns. Chinese? Japanese? A bit similar, but clearly neither. More likely a code.

And only three days left to solve it.

She leafed through the thin, translucent pages carefully, searching for something that might be a way in to this maze, and reveal the vital information she needed.

About twenty pages in there was, at last, something other than coded symbols. At the top right corner was some kind of diagram. Julie reached across the desk for a magnifying glass to inspect it more closely.

Drawn with the finest of lines, similar to an illuminated capital letter, surrounded by, no, yes, the same little shapes that filled all the other pages, carefully positioned within a filigree frame. Like something from a mediaeval manuscript, but with the code symbols instead of stylised birds and flowers. Julie took a photograph of the drawing on her tablet, so that she could enlarge it and see the shapes more clearly.

Where had she seen this before? In a book belonging to the Professor? She gazed across at the Professor's bookshelves, and smiled. She still had three days left.

10 minutes were up at that point.

at this rate it is going to take ages to write a whole book.

I couldn't attempt to put in all the symbols and filigree and so on, not with only 10 pen-strokes.
Posted by KirstenM at 14:18:00