Thursday 26th July - what we did yesterday part 3!

Yeah, we haven't finished with yesterday yet!

The C1 bus takes you all the way from outside the front entrance of the V and A to Victoria station. Perfect. We sat and slowly melted as the bus jerked its way through the early rush hour - He sat next to an elderly man and discussed antiques and computers and how you used to look things up in books but now you just google. Made a huge difference to the antiques trade, he said. I sat nearby and people-watched; such a variety of people from all cultures... and clothes.

I mean to have a go at sketching this later, snapped while the bus was stationary at some hold-up or other 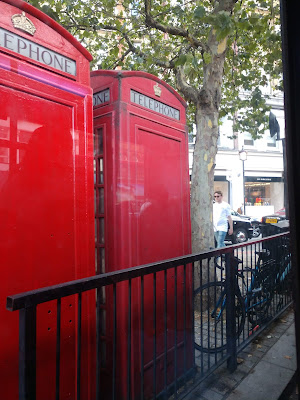 It seemed such an encapsulation of a London street corner. The plane tree, with the variegated peeling bark, the red telephone boxes, the railing, the bicycle...

It was a good day for sketching. This was across the lounge as we were having coffee and cake; four women. I think the two nearer women were trying to persuade the others to buy something... All very London and "modern" and bustling and like a magazine scene. It was an Apple tablet, of course. 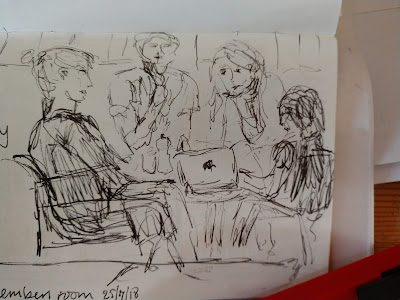 This was the scene outside the pub next to the theatre; we were sitting at a table belonging to the theatre bar. There were two huge empty wine-glasses on our table, left by the previous customers, which did a good job of making us look as though we were real customers instead of just seizing an opportunity to sit down.

The London "meeting for drinks after work, standing on the pavement in the evening" crowd was in full swing everywhere. 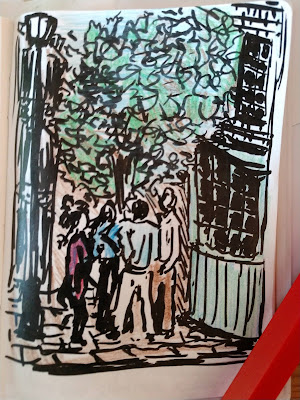 There has been a great regeneration all around Victoria, making it a "happening" sort of place.

The Other Palace Theatre is part of the Lloyd Webber Group; there was a packed out musical called "Heather in the main theatre, but we were there for "89 Days", about a gap-year student in New York on a tourist visa (but working as an au pair) discovering that New York is not what she expected.

The studio is down, down, down down into what must be a sub-basement; a small performance space with a bar and chairs and tables... I don't think I'll go there again... too far down, down....

But I thoroughly enjoyed the musical, and thought there were some witty lines, both in the script and the songs, and the performance was slick and confident and engaging. The Edinburgh production will apparently have a larger band (although one each of piano, cello and violin worked very well) and a larger cast, and costumes (the cast all wore different black clothes and managed to portray their ever-changing parts very well). Well done everyone (and especially Clare, of course!)

Email ThisBlogThis!Share to TwitterShare to FacebookShare to Pinterest
Labels: day out, drawings, London