This saga is going to run and run..., no, walk and walk might be more accurate.

James came back yesterday evening, and the result is a couple of panels 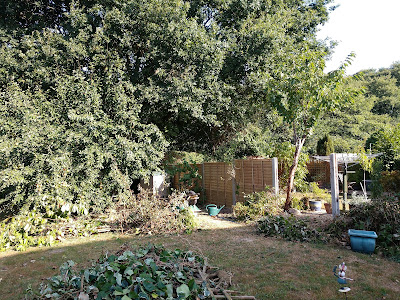 There would have been another, but it got broken as he unloaded it from the trailer. Meanwhile, our neighbour has decided that he WILL have his conifers razed to the ground after all. He had originally wanted them cut down from about 12 feet tall to around 8 feet. James had cut them right back on our side, which is why they look so hideous. That didn't matter, because the fence panel would have hidden most of them, and also the ugly chain link fence fixed to concreted in angle-iron posts. 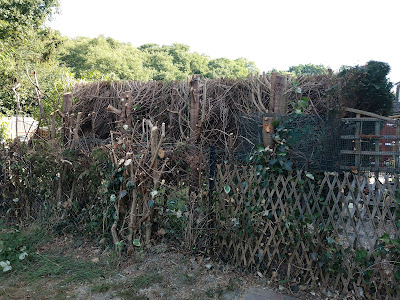 Now that the conifers are going completely, the chain link and posts will have to go too. (You can't see the chain link in this photograph, but believe me, it is there and it is not an attractive sight.)

"I could make you a lovely border in front of your new fence" suggested James. "Dig it out properly, bring in trailer loads of good soil, and plant it up with shrubs and climbers."

One of the things that has made gardening a dispiriting process her has been the hopeless, rough, intractable, infertile ground. The idea of James coming in and sorting it all out... time to rummage through all the money boxes and see what can be managed. 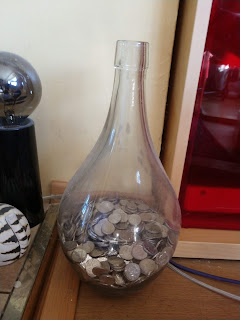 And there is always the money monster... one pupil loves him so much that she makes her mother give her coins to feed him... that's an esy way of earning money...


I was thinking of having easy-care shrubs or climbers which would provide some kind of flowers right through the year. James waxed lyrical, naming all sorts of things that I shall have to look up; I'm making a spreadsheet. Not too sure about ornamental grasses - I'll have to have a think about that.


The wasps have decided that our apples are ripe. So I picked one off the south side of the tree and tried it. I felt a bit like Snow White; the apple was rosy and red on one side but green on the other. I shouldn't have been surprised to find that the red side was pleasantly sweet, and the green side unpleasantly sour. I'm still awake, so it is not a magic apple. 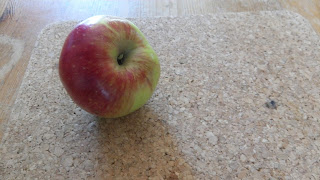 Another day has started. Breakfast (in bed) has happened, and I'm enjoying my second cup of coffee. Time to get dressed and do a few bits and pieces before the world gets too hot to think or move.
Posted by KirstenM at 09:06:00

Email ThisBlogThis!Share to TwitterShare to FacebookShare to Pinterest
Labels: gardening, Getting things DONE