The book club choice for last month was 'A Time of Gifts' by Patrick Leigh Fermor'. I had already read it several years ago, and enjoyed it then. 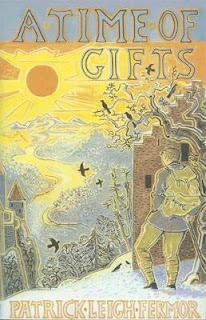 I think it may be one of the first books that Mummy read after her stroke; I have one of those penguin '40s' books of just the first few chapters (my brother gave me 40 of them for my fortieth birthday, rather clever, I thought). She loved the descriptions of the Netherlands, especially Rotterdam, before the war.

I spotted this book by Robert MacFarlane and downloaded it because it was only £1.99 and I liked the cover picture; 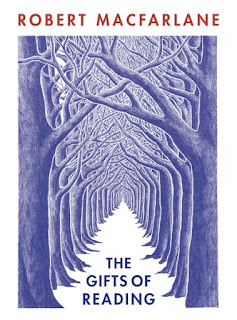 Then I discovered it is all about Robert MacFarlane's reaction to having been given a copy of 'A Time of Gifts' by a friend.... and the effect gifts of books have on the giver and the recipient.

My father, a couple of weeks ago, insisted on buying me a copy of 'The Hare With Amber Eyes' by Edmund De Waal. 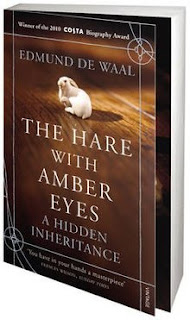 At the book club meeting, one of the members commented that there is a link between 'A Time of Gifts' and 'The Hare', in that a descendant of someone that PLF stayed with on his travels appears in 'The Hare'. I will have to finish the 'Gifts' i order to make the connection.

I've just started 'The Hare', but stalled in the first paragraph of the preface (I nearly always read the preface - it can be the best part of the book!) where De Waal recounts going to a language school in Shibuyah, Japan.

I teach an extremely popular chant in my music classes, which goes;

You then go on to add individual statements before repeating the chant.

I'd always thought 'Shibuyah' was a made-up word; it has a lovely sound and feel. And then the word leapt at me when I was least expecting it!


The chapter names in 'The Hare With Amber Eyes' are so enticing that I can't wait to find out more; 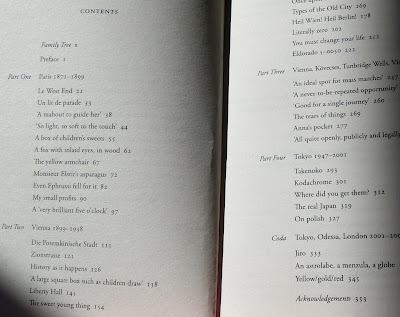 I ought to get up. It is nearly lunchtime. Himself has been busy fixing the gates back to the driveway; a job which has been 'on the list' for a few years. Every time he goes to the tool cupboard in the next room, I hear 'hohoho Merry Christmas' from the Toy Father Christmas that was in a stocking so many years ago. Its battery is lasting well.