Half term is a great time for letting go of 'ought' - except, of course, there are quite a few 'oughts' that I saved up for now half term.

Maybe not exactly 'saved up' so much as thinking that 'I'll have time to do x, y, and z, and maybe  even p, q and r as well.

I did manage to do a lot of little tasks that have been hanging over me;

All these 'oughts' mean that I'm feeling a lot lighter than I was. (I have an idea for a short story based on a 'speak your weight machine' which doesn't deal in avoir dupois')

I've done other things I wanted to do, rather than I oughted to do as well;

There is a way of knitting 'in the round' - ie making a tube, using a circular knitting needle of greater length than the diameter of the knitting, called 'Magic Loop'. It's a very pretty piece of topology or some kind of mathematical process, and I watched the video and even made it happen. Hooray!

For my next trick, I want to investigate how you knit TWO tubes on ONE circular needle simultaneously...  one can also knit small tubes on long circular needles using two needles - whoever thought of that? Or even knit two socks ONE INSIDE THE OTHER - now that sounds as though it could go very wrong, very quickly.  That might have to wait until Christmas now. 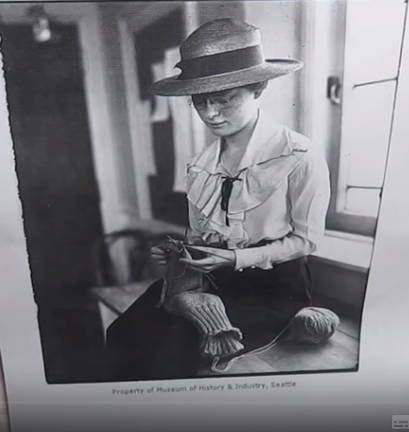 What else - I planted up all the little kalanchoe cuttings. I think I might have mentioned that before. 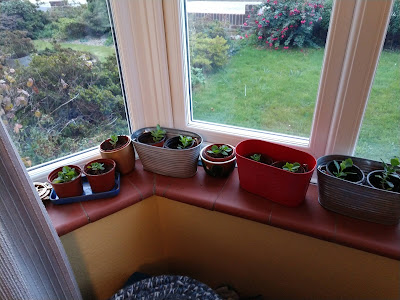 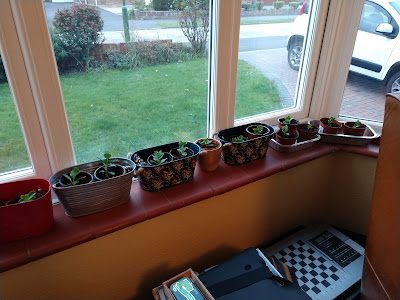 There are twenty. I have delayed sorting out the aloe vera plants upstairs - there are endless little baby aloe veras, all crammed into a couple of pots. They came from a single plant daughter's friend (the one with the horse) gave me about twenty years ago.

Also on my list - go out and have coffee with friends - yes, that happened.

Do some writing - yes, that's been done too.

We didn't manage to go away for the weekend, neither did we go to London. Himself spent most of last weekend with - in sequence - a vile cold, tonsilitis, and possibly a chest infection as well. So we took it easy, and stayed in most of the time doing not very much. Once he was getting better we made occasional short trips out - lunch and potter round the town or a garden centre - and then back into the warm. That is, warm, once the boiler problems were resolved. The heating still sounds as though it has massive indigestion, but at least the radiators are HOT.

Tomorrow will feel weird, when I go off to work. I'll try and remember to put my watch on - one of my rebellions against work is to not wear a watch during the holidays.

I may have gained a few ounces over the past week, but I have certainly lost a lot of weight.
Posted by KirstenM at 16:08:00