and that's on top of an early birthday at the weekend (cards, present) and a birthday treat this coming weekend (meal out).  Thank you everyone.

I'm looking forward to Advent too; I've done my Advent tea-lights, extracted the wooden Advent calendars from the not-in-the-loft-with-the-other-Christmas-things place (yes, we've made That Mistake plenty of times before!) and loaded the Jacquie Lawson Advent calendar (a birthday present from Canada) onto the computer; 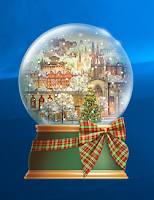 This is the icon that sits on the desktop screen, with the flakes of snow gently twirling around. I have resisted opening up the scene (so far).

I did have a sneak preview of the music for today. It is by Steve Reich, an American minimalist composer. I am delighted that this is the choice for my birthday. I have come across Steve Reich's music in only two contexts, both of which made a big impression on me. Once wa in my first few weeks at university; somewhere I still have a copy of the excerpt of his 'Clapping Music' which we struggled with in a seminar.

It is a pretty straightforward idea; each numbered section is played twice. Clapper 1 (top line) keeps the same pattern through out, but Clapper 2 shifts their pattern by one count at the beginning of each section. It was composed in 1972; we were trying to perform it in 1975 - talk about 'Early Adopters'!

The second piece of Steve Reich's music I encountered is called 'Different Trains'. A short recording was included in the resources for a music scheme I was using when teaching back in about 2001. Again, it is a surprisingly modern inclusion, as it was composed in 1990.

Different Trains (1988), for string quartet and tape, uses recorded speech, as in his earlier works, but this time as a melodic rather than a rhythmic element. In Different Trains, Reich compares and contrasts his childhood memories of his train journeys between New York and California in 1939–1941 with the very different trains being used to transport contemporaneous European children to their deaths under Nazi rule. The Kronos Quartet recording of Different Trains was awarded the Grammy Award for Best Classical Contemporary Composition in 1990. The composition was described by Richard Taruskin as "the only adequate musical response—one of the few adequate artistic responses in any medium—to the Holocaust", and he credited the piece with earning Reich a place among the great composers of the 20th century.[22]

Anyway, back to today's music; Steve Reichs 'Music for Pieces of Wood'. I was mesmerised; wonderful. This 'Year of Wonder' wander through November has been an unexpected source of pleasure. Here's a graphic score version, using electronic sounds which makes everything clear. Sort of.