I went to church this morning, to the early (trad) - I'm not sure that my tendency to go only when it is my turn to play the organ makes me a regular attender? It does mean I turn up at least once a month - twice in this case as I was standing (sitting?) in for someone else. How many other smallish Parish churches have five organists on the rota, and three of them can use their feet! (Not me - I find my left hand starts following my feet, or vice versa).

We also have several pianists as well for the second service - their music is delivered by The Band - an eclectic mix of piano, vocalists, guitars, drum kit, bass guitar, violin, flute and cello, depending whose turn it is to play.

PS 'Trad' doesn't mean The Prayer Book. It means the latest red communion booklet. Not the same thing at all, dearly beloved, but that's okay by me.

Afterwards I came home to find Himself ready for a second cup of coffee after having completed various houseworkings (changing the filter on my oxygen machine, hoovering downstairs, laundry, making a loaf of bread ). Second cup of coffee was exactly what I wanted. I usually drink tea at church, having sampled church coffee enough times now to know which I prefer.

I have been placing washi tape around tealights, ready for Advent; enough for four Advent calendars. One for me, and three for friends. I have enough washi tape and tealights left to make some more - if you want one, let me know. The instructions for making your own are simple;

Stick tape around tealight. Repeat until you have 24. Try not to lose them before 1st December.

Here are some of the ones I made, waiting to be put somewhere sensible. 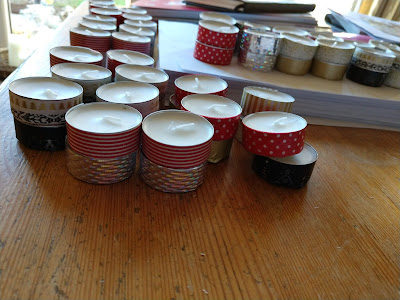 Finding a way of wrapping the set of tealights I want to post was a challenge. I found they would nearly fit inside the cardboard inner tube of wrapping paper, so I cut a lengthwise slit in the tube, and stacked the tea lights inside. 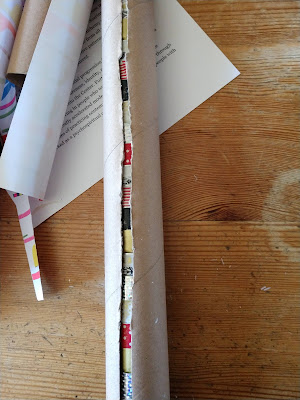 That was when I discovered the spare wrapping paper that I had rolled up and pushed inside the tube for safe-keeping, now turned into strips of wrapping paper where the scissors travelled up the length of the roll.... 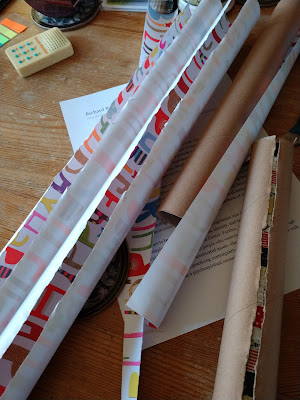 Not much use for wrapping presents, but I have used it to wrap the tube of tealights.

The music for today is... Musica Ricercarta no 7 in B flat major by Ligeti. Oddly mesmerizing, and rather enjoyable.