It was cold this morning - the coldest it has been yet. I wondered if the trees would all have a furry coating of frost, but in the event I forgot to look.

I set off early on Thursdays; last week I had a horrible couple of minutes when the queue of fast moving traffic I was in suddenly jammed up behind a slow-moving cyclist creeping up the steepest part of the hill leading to the village. We all crashed down through several gears, and went from a brisk 40 mph to about six miles an hour. I didn't dare change down another gear in case I stalled, so did my best in second. A gear of minus one would have suited me better.

So today I was praying and praying that I had timed it to miss the cyclist... and Lo! the road was clear! Phew.

Then a tawny brown shape reared into flight from the roadside, veering right into the path of my car long before it was properly airborne. There was nothing I could do, apart from rather uselessly crying out 'No n  no no no'. Luckily the owl - it looked HUGE - managed to gain enough height to clear most of my windscreen, and slipstream did the rest. I could begin to become phobic about that particular road.

I only teach for two (very intense) hours, so was home for 'elevenses'. I had been eyeing a packet of  Heston Blumenthal 'mince pies with a lemon twist' with some suspicion, but He assured me that they were very good. I had one, and yes, well worth getting more of them. Not too sweet, and good proportions of pastry, strudel topping and mince meat. Mince Pies they are Not, though.

It has taken until now - lunchtime - for me to shed my coat and deem myself warm again. I don't know why I got so chilled - but there you are.

I'm blogging now, because if I leave it until this evening it won't get done.

It is St Cecelia's Day (patron saint of music, but you all knew that, didn't you?) Also Benjamin Britten's birthday and here is his 'Hymn to St Cecelia' 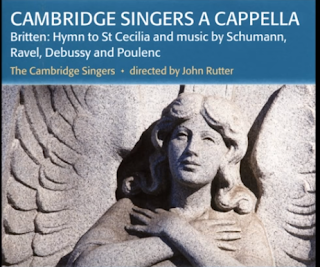